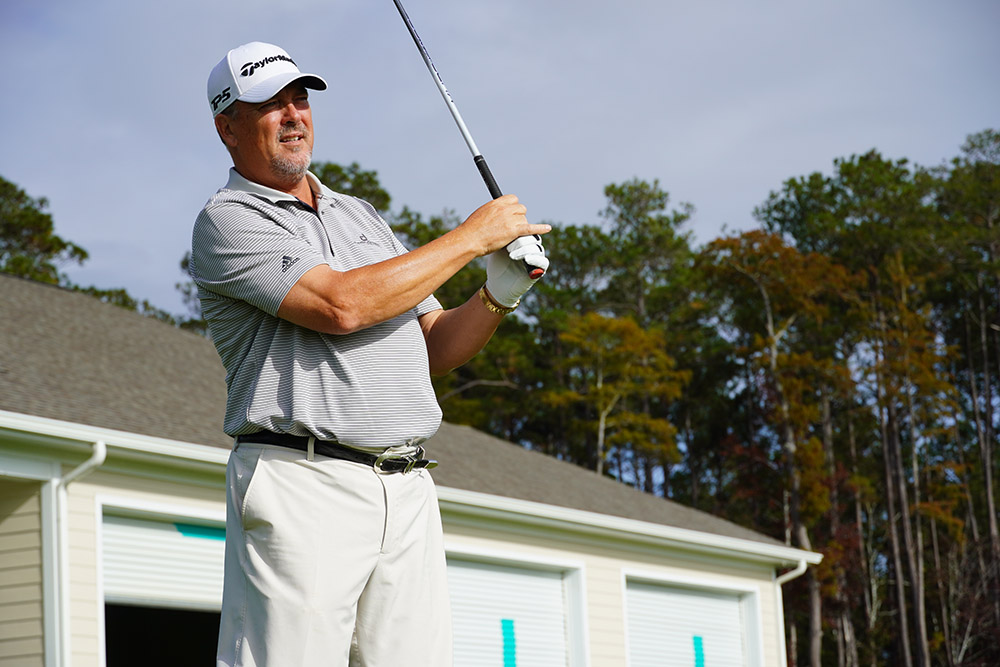 Dustin Johnson Golf School Director of Coaching Allen Terrell has announced the addition of Sean “The Beast” Fister to his instruction staff, following Fister’s lengthy and illustrious career that has seen him become a three-time winner of the World Long Drive Championships.

“Sean has traveled the world conducting more than 1,000 clinics for people to help improve their game. There is no one more qualified and experienced who can teach our golf clinics and schools,” said Terrell. “Sean has an incredible passion for helping people improve their game, and he is the perfect fit for our goal of adding more opportunities for golfers to improve.”

Fister is a coach in the Dustin Johnson Junior Golf Academy, which offers a developmental roadmap for young golfers ages 5-13 to introduce them to the game and hone their competitive skills along the journey. Terrell noted that Fister will also be leading a new series of teaching clinics at the Dustin Johnson Golf School, which will be scheduled and announced in the near future.

“From its namesake to its staff, facility, and technology, the Dustin Johnson Golf School is a world-class operation. I can’t imagine a better opportunity for me to pursue my passion for sharing my knowledge to help golfers, from kids to seniors, improve their play in the game I love,” said Fister. “Having raised three kids of my own, I am especially passionate about helping young golfers learn to play a game that also comes with great life lessons that will serve them well beyond the golf course.”

Fister joins the Dustin Johnson Golf School after a decorated career of competing in the World Long Drive Championships, which he did 33 times. He remains to this day the only American competitor to win this competition three times (1995, 2001 and 2005), and was the first-ever golfer to eclipse the 400-yard barrier in the finals of this event when he accomplished the feat in 1997. Sean is also the oldest competitor to win the World Long Drive Championships when he did so at 43 years, 4 months.

In addition to his aforementioned long drive achievements, Sean’s list of accolades also includes his:

Sean brings to the Dustin Johnson Golf School more than three decades of experience as a world-class athlete, coach and instructor, and comes from a family lineage that has produced seven professional athletes over four generations in golf, baseball and basketball. Prior to launching his golf career Sean was a high school track & field star whose achievements culminated in a Missouri State Championship in the pole vault, earning Sean an athletic scholarship to compete at the highest collegiate level in both the pole vault and javelin for the University of Florida. Along this journey he set numerous high school, college and stadium records, some of which still stand nearly 40 years later.

“I have had my eye on Myrtle Beach for some time, and wanted to be where the action is in golf,” said Fister. “This was an opportunity that was simply too good to pass up. To be a part of such a great facility and team at the Dustin Johnson Golf School is a dream come true for me! I hope to make a positive impact in the community that is already ‘The Golf Capital of the World.’”

About the Dustin Johnson Golf School
The Dustin Johnson Golf School at TPC Myrtle Beach in Murrells Inlet, South Carolina is a state-of-the-art instructional facility that has earned its place among the game’s best. It includes a 4,000-square-foot indoor complex with three hitting bays to go with a sprawling outdoor complex featuring a 12,000-square-foot practice green, 10,000-square-foot chipping green and 140-yard teeing area. The school features a full suite of the game’s leading teaching technology including TrackMan, Swing Catalyst, SAM Putt Lab and K-VEST 3D. The Dustin Johnson Golf School instructional staff is led by its director of coaching, Allen Terrell, who boasts a long list of accomplishments and accreditations and has mentored many of the game’s top talents including PGA TOUR professional Dustin Johnson, a mainstay at the top of the Official World Golf Ranking. For more information, visit http://www.DustinJohnsonGolfSchool.com.