Aces are Wild at Rumbling Bald 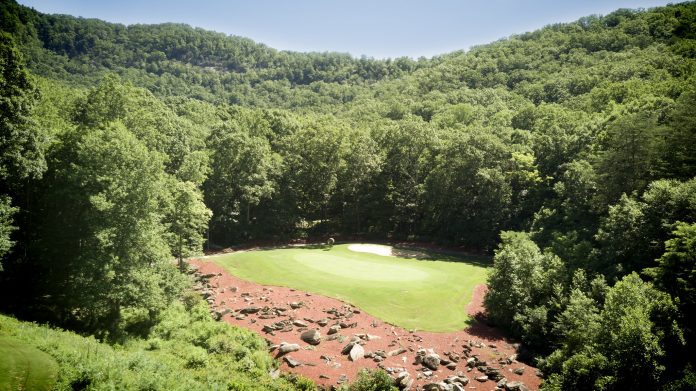 On average, golfers play this wonderful game for 24 years before celebrating their first hole-in-one. Less than two percent of all golfers card a “1” each year, and 50 percent of those golfers are age 59 and under. The average handicap for those buying everyone a round of drinks at the 19th hole is 14. Better to be lucky than good, as they say.

So, what are the chances that an 80-year-old golfer records back-to-back holes-in-one during one round on the same golf course? Approximately one in 67 million. Yes, you are more likely to be struck by lightning twice in your life than to card two consecutive aces. But believe it or not, that’s exactly what happened at Rumbling Bald’s Apple Valley course on Sunday, July 24, 2022.

Paul Huber stepped to the tee on the par-3 third hole of our award-winning Dan Maples-designed layout. He pulled his PING 9-iron from his golf bag and took dead aim from 118 yards away. A crisp “thwack” ensued, and a few seconds later, the ball disappeared into the hole. An extended celebration was quickly underway with his playing partners – Kent Dyer, Rob Phillips and Gary Romaine.

Then, what happened next, has quickly become the stuff of legend around Rumbling Bald and Lake Lure. Just a few minutes later, at the par-3 eighth hole, Huber again stepped to the tee, cracked a half-baked quip about making another ace, and proceeded to make another hole-in-one with his 5-hybrid from 148 yards out.

Dyer, Phillips and Romaine had witnessed a “black swan” event few other golfers had ever seen. In fact, the last time it happened on the PGA TOUR was at the Barclays at Plainfield Country Club in Edison, N.J. at the hands of Brian Harmon. Harmon made social media waves by famously posing for a photo holding two aces from a deck of cards.

It was a special Sunday at Rumbling Bald, a story that will stand the test of time. And as the buzz made its way around both golf courses, many celebratory drinks were consumed at Huber’s expense!

Bald Mountain, at 6,300 yards, is renowned for its unique configuration of five par 5s and five par 3s. Movie buffs appreciate the 16th green, the backdrop of a scene from “Dirty Dancing.”  A protégé of golf course architect George Cobb, Lewis is known for his traditional approach to course design. This philosophy is reflected in Bald Mountain’s playability from tee to green.

The property’s 150 vacation rental homes, condos and studios are ideal for golf groups of various sizes and feature golf course and mountain views. Post round, golfers can relax at Legends on the Lake, casual dining along the shores of Lake Lure.

Savannah Quarters – Live the Lifestyle You Always Wanted on the Georgia Coast.