Arnold Palmer To Be Honored with US Postal Stamp in 2020 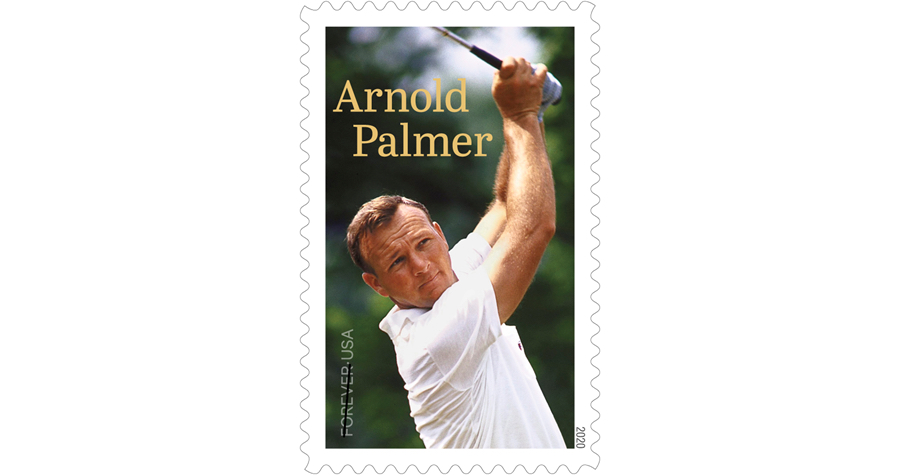 The United States Postal Service announced today that it will be recognizing Arnold Palmer with the issuance of a nationwide stamp as a part of its 2020 stamp program.
The U.S. Postal Service will honor Palmer for his positive impact and compelling story, rising from humble beginnings to become a globally revered champion. The U.S. Postal Service notes, “with drive and charisma, he helped transform a game once seen as a pastime for the elite into a sport enjoyed by the masses.”
“To have my father celebrated in this way is a true honor,” said Amy Saunders, Palmer’s daughter and chairwoman of the Arnold & Winnie Palmer Foundation.  “It’s something I think he would be proud of as both an individual and as an American, and it’s a wonderful way to preserve his legacy.”
The stamp features James Drake’s action photograph of Palmer at the 1964 U.S. Open at Congressional Country Club in Bethesda, Md.  Palmer’s name appears in the top left corner and the words “Forever” and “USA” are printed along the bottom of the left edge.  Art Director Antonio Alcala designed the stamp.
The Palmer stamp is being issued as a Forever stamp, meaning that it will always be equal in value to the current First Class Mail price. This is the first time Arnold Palmer has been honored with an official stamp. Fellow Latrobe, Pa., native Fred “Mister” Rogers was honored with a stamp in 2018.
The USPS will announce the date and venue for First Day of Issue at a later date. Once dedicated, stamps can be purchased at a local post office location or online atwww.usups.com/shop.
Share
Facebook
Twitter
Linkedin
Email
Previous articleCaddyDaddy Launches New CLAW Golf Glove in time for Holidays
Next articleCobra Has a New Speedzone