To many ardent golfers, Pinehurst #2 is Donald Ross’ crowning achievement, especially the domed, convex-shaped greens for which the course has become revered. These greens are not only tough to hold on long approach shots, they feature intricate breaks that are almost invisible to the human eye. Even PGA TOUR professionals will attest to this.

Donald Ross and his crowned greens.  Mr. Dye was stationed at Fort Bragg in the mid-1940’s and often made the short trip to Pinehurst to play #2 – for about $3 a round! Back then he says, the greens were broad and receptive to well-hit approach shots. According to Dye, they weren’t elevated at all, but instead built rather low to the ground. Ross died in 1948 and the accumulation of sand, top dressing and over-seeding in the preceding years raised the height of the greens anywhere between 12 and 18 inches. And, as the years went by, the size of the putting surfaces shrank.

This could very well be how the association with Donald Ross and his wildly undulating, humpbacked greens came to be. The truth is that there really is no such thing as a “Donald Ross green,” Pinehurst’s famously crowned putting surfaces are the results of regular maintenance and time. I wonder if Ross were around today to do a renovation of his beloved #2, would he reshape the greens differently? The Donald Ross-designed Brunswick Country Club in Brunswick, GA tells a story that aligns with what Pete Dye has said all along, and they’ve got the pictures to prove it!

Although the course’s logo gives an opening date of 1920, the history of Brunswick Golf Club can be traced back to 1899. Throughout most of its history Brunswick has been an accessible, blue-collar club. The club moved to its current location on Highway 17 in 1936; at the time; it was a 9-hole layout with sand greens. Donald Ross did the back 9 routing in March of 1938 and came back 6 months later to rework the existing front 9-hole layout and put down Bermuda grass on the greens, creating the existing 18-hole layout that you see today.

The course remained basically unchanged for almost 70 years which is a pretty good ROI by anyone’s standards. In 2006, after careful study and deciding on the proper course of action, Davis Love III, his brother Mark and the entire Love Golf Design Team were commissioned to renovate the course.

Growing up in the area, the Loves had played the course many times and were familiar with the routing. Their work included a full overhaul of the bunkers, greens and green complexes. For years it had been rumored that the original Donald Ross sketches of Brunswick Country Club existed somewhere in the state of Georgia. As the renovation began, the sketches were handed over to the Loves by a member who had been given them years before by a former county engineer who worked on the original construction. They also discovered that unlike many courses Ross is credited with designing, he actually did visit Brunswick at least twice during its construction.

The newly discovered sketches showed each green site, including the existing sand greens that Ross had renovated to match the new holes. They also showed the size and shape of each putting surface, specific contour and elevations, bunker placement and depth, and the location and height of surrounding mounds and slopes. 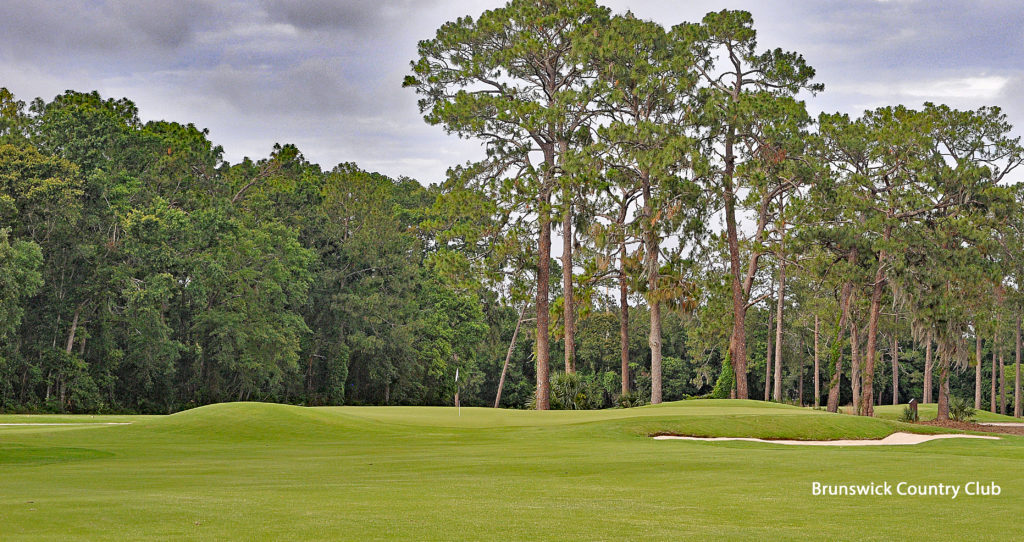 Armed with this new information, the excavating began. As years of accumulated top dressing and regular green maintenance was stripped away, The Loves uncovered a layer of the original black topsoil as far down as 14 inches below the surface, revealing the original 1938 greens. This proved to be a great starting point for returning the putting surface to their original design.

Like most courses in the area, Brunswick Country Club is basically flat. It’s wide open off the tee, allowing you to grip it and rip it, although several drainage ditches cross the fairways of three holes on the first nine, so be sure to check your GPS for distances. After playing the course a few times, members learn where to place the ball off the tee to have the best angles to attack certain pin placements.

New tees have been added which lengthen the course to 6,802 yards from the Blue tees, with a course rating of 73.1 and a slope of 131. In all there are 6 sets of tees allowing men and women to play the course anywhere from 6,437 yards (Ross Tees) to 4,861 yards (Green Tees).  There’s a yardage suitable for every level of player: young, old, accomplished or novice. Just be sure to choose the right set of tees to suit your game and you’ll maximize your enjoyment. 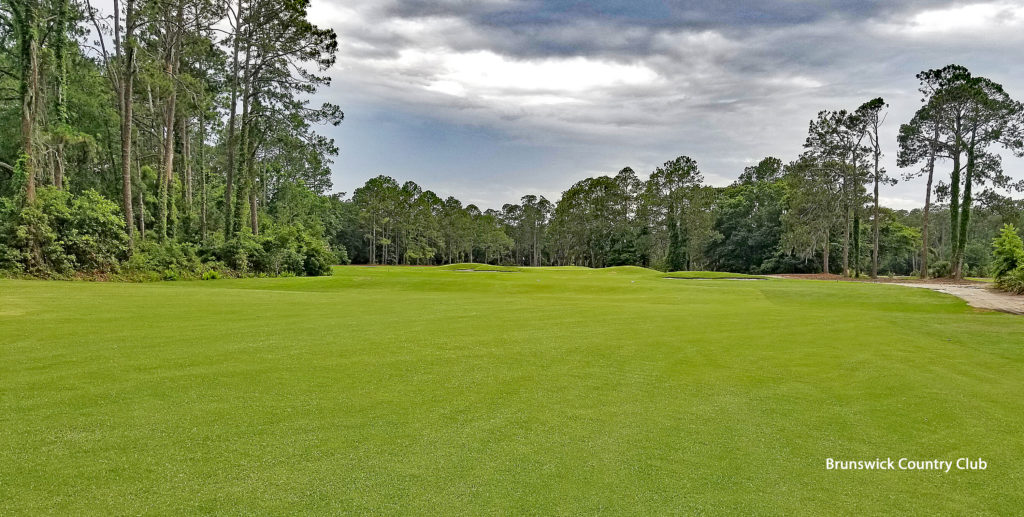 Most Memorable Hole: Number 4. Par 3, 152 yards (Blue Tees). The green complex on the par 3, 4th hole is quintessential Ross, with a deep, massive bunker across the front of the green, meaning you need to take enough club to carry the green rather than running it up there. He does this on several holes; sometimes with sand, sometimes with water.

Favorite Par 3: Number 8, 211 yards (Blue Tees). This lengthy par 3 features water on the left that shouldn’t come into play; the same with the trees on the right. The rectangular green slopes gently and is surrounded by 4 sand bunkers. Hitting and holding the green with a long iron can be a challenge.

Favorite Par 4: Number 18, 426 yards (Blue Tees). The finishing hole is one of the best par 4 holes on the entire layout. This dogleg left features a waste bunker on the right that shouldn’t come into play, as well as a single fairway bunker on the left side that needs to be avoided. Carry the fairway bunker off the tee and you’ll have a short iron into a green guarded short right and left by Donald Ross bunkers. Par is a great way to finish.

Favorite Par 5: Number 14, 592 yards (Blue Tees). By far the longest hole on the course. Trees line either side of the fairway off the tee There are a couple of trees and two bunkers about 60 yards apart that sit in the middle of the fairway. A good layup shot will carry them and leave a short approach shot to a small elevated green guarded on the right by a deep bunker. 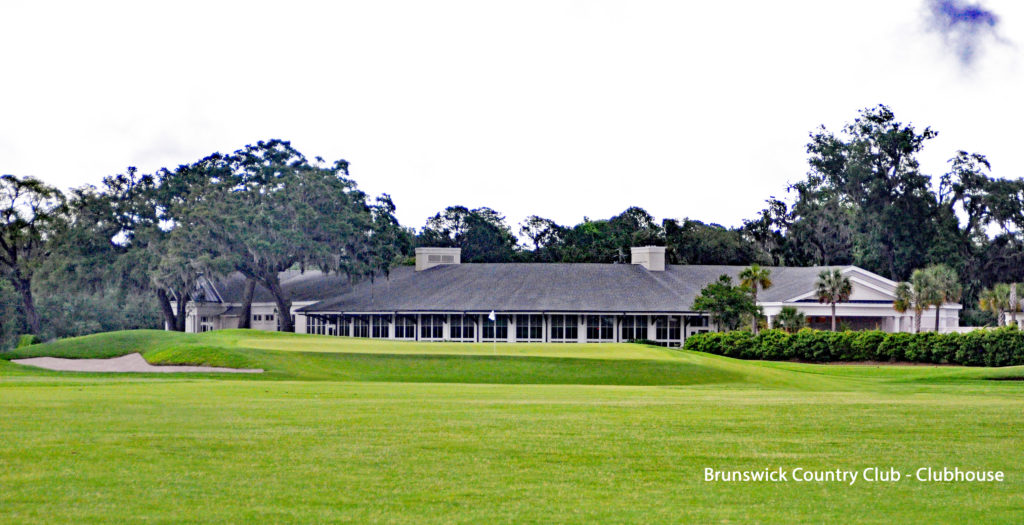 Last Word: Brunswick Country Club is all Donald Ross, but what defines the club are the greens and green complexes. Several showcase Ross’ skill and imagination as well as the product of work of Love Golf Design.  In addition to redoing the greens, Love Golf Design has restored the original grassed down bunkers; some of them are four feet deep and surround the greens. You’ll find greens with every type of break imaginable; no one green resembles another. The breaks, slopes and undulations will keep members guessing for years to come.

The 16,000 square foot clubhouse at Brunswick Country Club has had a makeover too. It consists of a pro shop, fitness center, spacious dining areas a grill room and bar area and a meeting room. The clubhouse overlooks the swimming pool, 9th and 18th greens. Much of the interior has been detailed with a dark burnished wood. Both the men’s and women’s locker rooms are well-appointed, with all the amenities you’d expect in a private club. 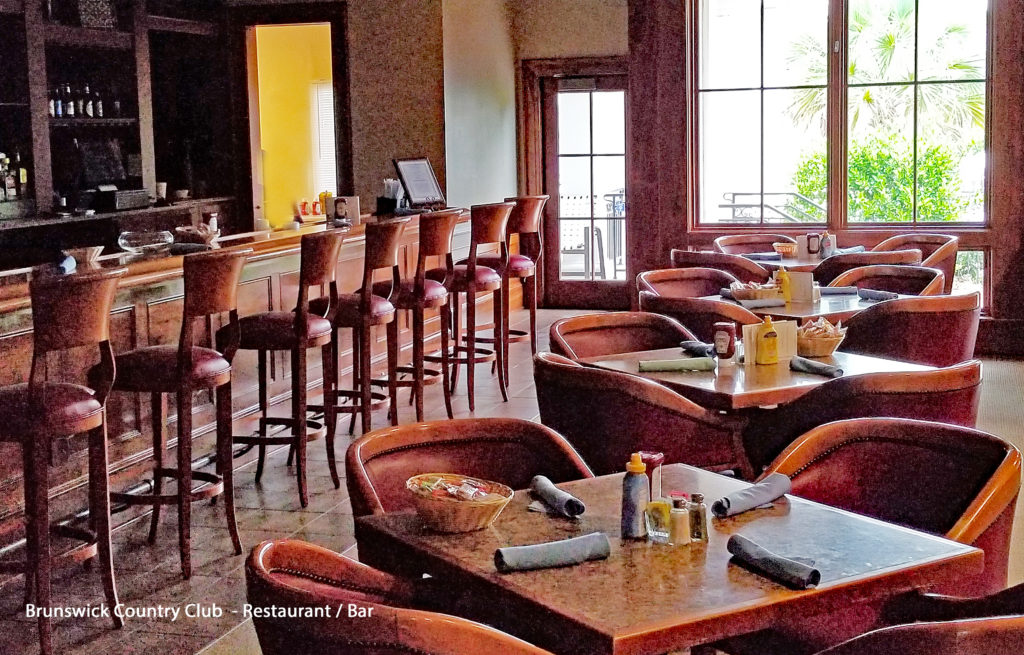 Membership numbers show that Brunswick Country Club is headed in the right direction. Since the renovation, many golfers have discovered this renovated gem and everything else that Brunswick Country Club has to offer. As a result, membership numbers have since risen considerably. There are several types of memberships available including full single, corporate, non-residential and seasonal. Brunswick Country Club offers membership packages that are flexible and affordable for both individuals and families.  There is a limit on each type of membership so if you’re thinking about joining, you’d better act quickly. Better yet, if you join now, you first month’s dues are waived. There’s also an opportunity to take advantage of a four-year, interest-free payment option on initiation fees or if you’d rather pay up front, there’s a discounted rate. For more information call Dan Hogan at (912) 222-5910 or email him at  danhogan@brunswickcountryclub.com.

Ford Field and River Club – Living the Lifestyle You Deserve