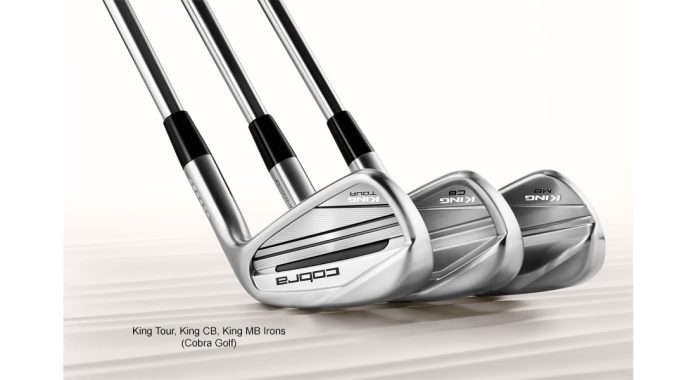 Cobra Golf has introduced three members of the King iron family for the new season including the King Tour, King CB and King MB models.

WYNTK
The King family of irons is Cobra’s entry into the “Big Boy” market and designed for very good players, elite amateurs, and tour professionals.

They point out their five-step forging process rather than the usual four steps gives better grain pattern in the metal, technically an isotropic internal grain structure—if you are up on metallurgical terminology. This type of forging is especially precise and in the case of the CBs and MBs no added tungsten weighting is needed to ensure the proper location of the center of gravity.

Blade lengths on Tour model are shorter than on the previous Tour MIM and with 2° stronger lofts so they could be classified as a distance iron.

Another interesting fact in the CBs and MBs is since the gapping is consistent across the two models, a combination set used by many professionals and elite amateurs would be composed of the 4 through 6-in the CB and 7-iron through PW in the MB. This provides added forgiveness in the long irons where even better players can use it and more control in the short irons where it is an advantage in scoring.

“The five-step forging process is critical to both the feel produced at impact by each of our new KING irons as well the consistency of performance,” said Tom Olsavsky, Vice President of R&D. “Players who desire the feel of forged want a soft sensation at impact rather than one that’s overly crisp, and our process delivers the desired sensation. But forgings can also be lacking in consistency due to the challenges involved in the forging process, all of which we’ve improved on by creating forged irons with superior precision from clubhead to clubhead. Players who favor forged irons now have the option to enjoy all the benefits of a forging with the consistency normally associated with cast products.”

Ed Travis
Ed Travis is a national award winning golf journalist and has carried on a lifelong love affair with the game. His work covering the business of golf, equipment, golf personalities and travel is regularly seen in numerous print and electronic publications. He has competed in tournament golf both as an amateur and senior professional and though his competitive days are behind him, Travis still plays regularly. He and his wife live on a water hazard in suburban Orlando.
RELATED ARTICLES
Drivers