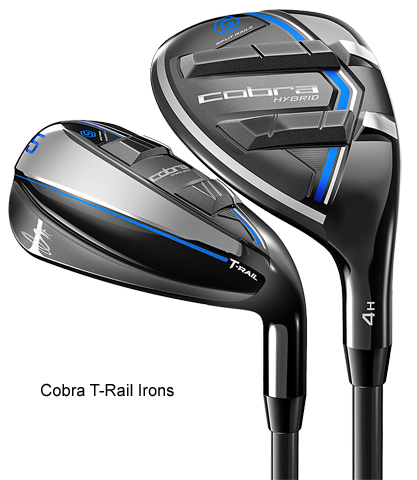 WYNTK:
Cobra has lots of experience in making clubs specifically to help higher handicap players hit the ball solidly with a higher trajectory as evidenced by the Baffler utilities that became one of the most played hybrids of all time.

The new T-Rails are a combination of hybrid and iron design. Like a hybrid, they have hollow heads and like an iron the faces are flat without any bulge and roll. They are targeted for use by players with handicaps of 17 and higher and since there is no reason why a club in this category cannot have good looks, the T-Rails have a striking appearance with their chrome/black PVD finish.

Lofts are strong for the sake of added carry distance but the weight positioning in the clubhead and the E9 variable thickness face make for a high launch plus provide an extra measure of forgiveness when impact is not exactly in the center of the face.

The feature that attracted our attention though is the two Baffler rails on the sole and like those used on preceding Cobra models they are a major contributor to getting the ball airborne from almost any lie. The rails are hollow and split just behind the face to allow more face flex at impact; Cobra tells me up to 70% more. We first saw the split rails used on the King Speedzone hybrids last year and they returned on the current Radspeed hybrids and on both these clubs work very well.