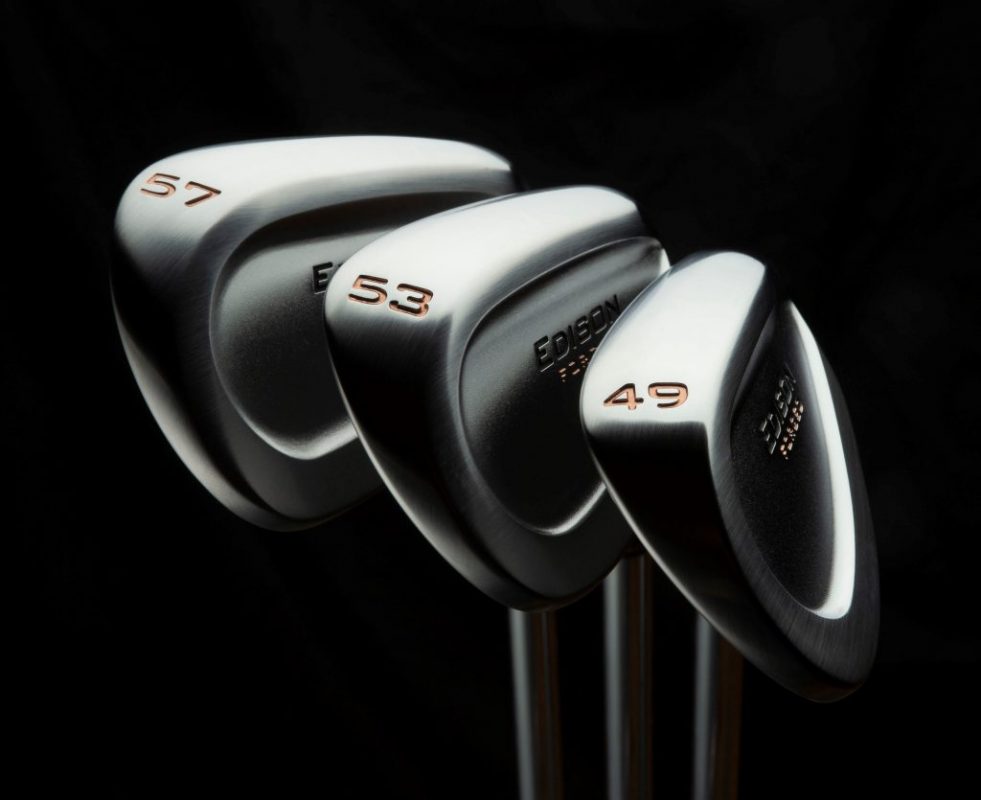 According to Terry Koehler, Chairman and Director of Innovation for Edison Golf, my golf bag is similar to that of millions of golfers out there.

It features a late model driver with all the latest bells and whistles. Usurping most the available space is a fairly new set of irons and brand-new 4-hyrbrid.

And my putter? Depending on the day, that could be the latest and greatest arachnoid-looking mallet or my blade putter from 20 years ago. As for my wedges, well, they were purchased back when Y2K was a thing.

“Golfers tell me they haven’t seen any performance improvement from their wedges over the years, so most of them don’t buy new ones,” Koehler says. “The amount of research and development that’s gone into drivers, alone, dwarfs the innovation in the entire wedge category over the past 20 years.”

Referred to as “The Wedge Guy” by industry insiders, Koehler founded Edison Golf after reviving the Ben Hogan brand from 2014 to 2016. He has almost set out singlehandedly to revolutionize the way wedges are designed and engineered.

Edison Golf is the culmination of all the time-tested designs, golfer surveys, patents and “aha” moments the Texas native has had over the years, rolled up into one hyper-focused company.

But back to my wedge situation, and why it’s so similar to yours.

According to industry data, the wedge category is the smallest in the golf equipment industry. While golfers purchase roughly 2.5 million drivers and putters every year, and nearly a million sets of irons, they buy just over a million wedges, annually.

Given how important the short game is, it begs the question … why? For starters, a quick look as the sales data reveals a never-ending catch-22, golf’s version of the chicken and egg conundrum.

At some point, recreational golfers stopped seeing game improvement from their wedges and concluded they weren’t as important as their other clubs. As we all know, golfers aren’t inclined to spend money on gear that doesn’t impact their performance.

Large equipment manufacturers, in response, continued to focus on the production of wedges designed primarily for PGA Tour players and allocated the bulk of their resources to longer clubs and putters.

“Close to 98 percent of golfers out there are playing Tour players wedges,” Koehler says. “But you must realize two things about these guys. First, they have developed extraordinary scoring range skills that even the best amateur players cannot approach. And second, they’ve done it with wedges that just have not changed much at all since they started down their paths to professional golf.”

According to Koehler, Tour players prefer wedges that are a blank slate. After all, they have the time to tinker, adjust and manipulate them as needed.

For example, they change their swing paths or use different parts of the club face to produce the desired result. And they can fly the ball higher or lower as needed, while self-regulating the amount of spin they impart.

That’s just not the case for the average golfer.

Changing the Conversation, and the Category

Koehler set out to design and build the most forgiving wedges in the game focused almost entirely on amateur golfers.

The company’s claim is a bold one: Edison wedges are twice as accurate as what’s in your bag now, leading to approach shots that are up to 31-feet closer to the pin. It’s all about making your not-so-good shots more like your best ones, as Koehler likes to say.

Totally intrigued, I decided to put Edison wedges to the test. For the past year I’ve used the Arccos system to track nearly every shot I’ve hit with every club in the bag.

As such, I had detailed data on my two wedges: 50 and 58-degree blade-style offerings from a leading manufacturer in the category.

Note: I also carry a 56-degree “sand wedge” that I use only from greenside bunkers and didn’t include it in my comparison since the data would be skewed.

The Arccos-generated data for my old wedges:

After exporting the data, I then went through Edison Golf’s detailed online questionnaire, which is golf’s version of a Myers-Briggs personality test. For added measure, I also sent Koehler my Arccos data.

Upon digesting all of this info (which he does for every customer) Koehler personally responded with a set of recommendations on gapping and loft. A couple weeks later, the most beautifully-wrought 49, 53 and 59-degree wedges arrived at my door.

Living in beautiful Greenville, South Carolina has it benefits in March. Like being able to log six test rounds in two weeks with the new Edison wedges, mostly at Cherokee Valley Course and Club in Travelers Rest. Here’s the Arccos data from those 108 holes:

As the data shows, I’m starting to chip away (no pun intended) at some legit short-game improvement. And the different between my old 58-degree wedge and the 59-degree Edison wedge is staggering, thus far.

Just as importantly, Koehler quickly spotted a chasm in my wedge gapping, now remedied by the 53-degree wedge. They say “Wedge Guy,” but I say “Wedge Whisperer.”

As I put in more practice time and log more rounds with the Edison wedges, I anticipate the GIR and distance to the pin performance to improve even more. They just feel so pure on approaches, and I’m digging the lower trajectory.

What’s not accounted for in the data above is chipping around the greens. With the Edison wedges, I don’t have to hit it perfect every time. I’ve never felt more confident, and I’m chipping shots I used to putt.

Edison wedges run $179 and include Koehler’s patented forged heads, premium KBS Tour steel shaft and Golf Pride Tour Velvet +4 grip. But if you have a preferred shaft and grip, he’d be happy to install them instead.

“We’re the only company that will customize every component of your wedges,” Koehler says. “We believe that doing things in this uncompromised manner is the only way to be serious about making the finest wedges in the game.”

From both an aesthetic and performance standpoint, mission accomplished. For more info on all the stats, data and science behind Edison Golf, visit www.edisonwedges.com.