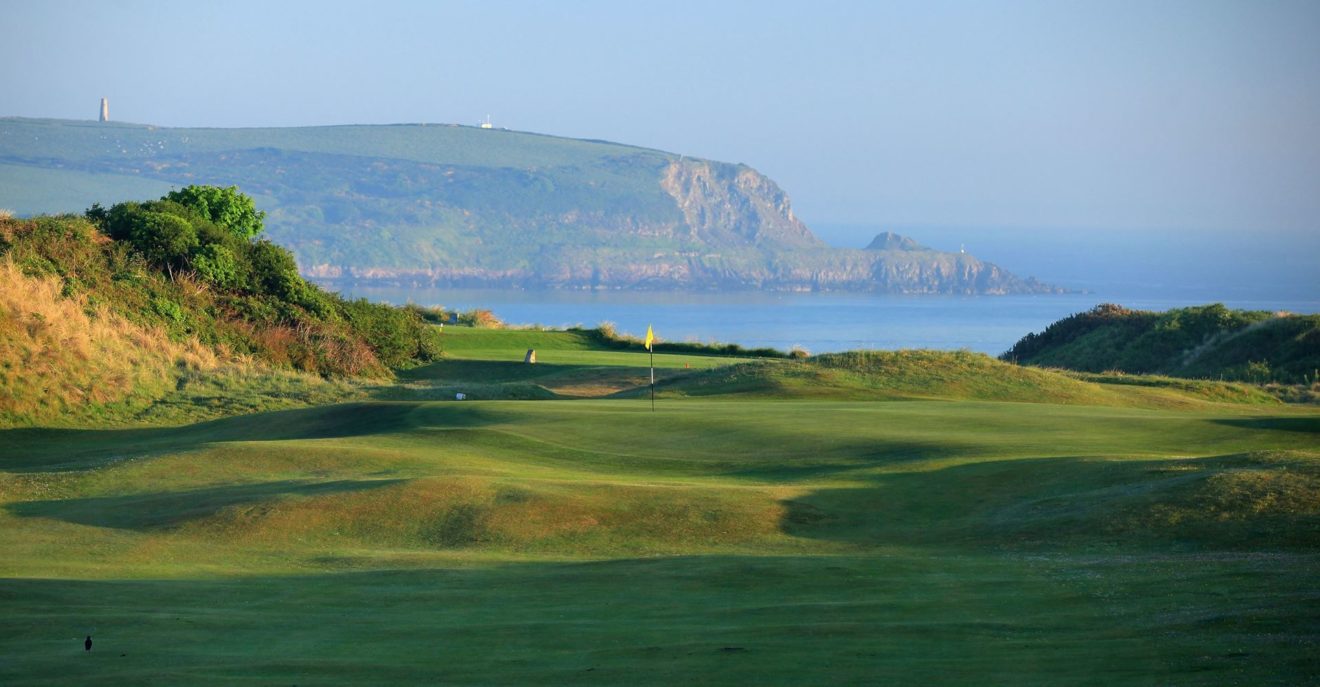 While sightseeing, fishing, surfing, and taking long walks along coastal paths are popular activities for visiting tourists to Cornwall, golf is another big reason why vacationers flock to England’s most western county.  There are more than 30 golf courses in Cornwall, ranging from the Cape Cornwall Golf and Country Club in the western part of the county (not far from Land’s End) to the Bude & North Cornwall Golf Club in the northeastern part of the county (not far from the Cornwall-Devon county line).  For history buffs, you might also be interested to learn that Cornwall’s oldest golf course was established in 1889, the West Cornwall Golf Club, located in Lelant, which is on the outskirts of St. Ives.  So, golf has been a part of Cornish life for more than a century.

The architect of three specific golf courses in Cornwall is actually one of golf’s greatest golfers and one of England’s most decorated champions — five-time Open Champion James Braid, who won the Silver Claret Jug in 1901, 1905, 1906, 1908, and 1910.  He designed Perranporth Golf Club (in Perranporth), Budock Vean Golf Club (near Falmouth), and St. Enodoc Golf Club (near Rock).  Perranporth and St. Enodoc are premier links courses, while Budock Vean is an inland course which means it falls into the category of being a parkland course.  All three courses are a delightful way to complement a trip to Cornwall.  Frankly, together, the three courses (and a few others) represent a good reason to come to Cornwall in the first place. 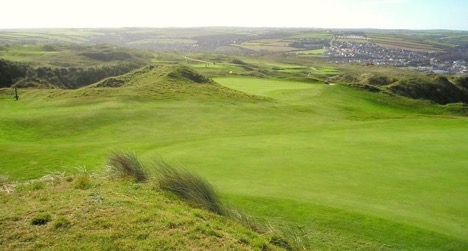 When you play the Perranporth Golf Club, the views of the surrounding area are memorable, breathtaking, and worthy of a picture-postcard portrait.  The sand dunes are golden in color and the hue of the nearby sea will change with the weather, depending on the mix of sun and clouds.  And, the views of the course while standing on the 5th and 14th tees are stunning.

Kudos to Braid for recognizing the natural contours of this seaside strip of real estate.  He took a ‘go with the flow’ approach when designing this course.  In many respects, he had no choice since he did not have access to bulldozers or any kind of earth-moving machinery.  Basically, he had to stick with what Mother Nature provided and She did not disappoint.  The course remains as relevant, fun and challenging to play now as it was when the course first opened in 1927.

The best defense mechanisms at Perranporth GC are the wind off the nearby Atlantic Ocean and the quality of the greens, which are quite quick and always true.  It is worth mentioning that there are many raised greens at Perranporth, which certainly test your chipping skills, especially if you miss the greens on the wrong side.

The Perranporth Golf Club measures 6,296 yards from the tips and is a par 72.  Don’t let its relatively short length deceive you.

Adding to the mystique and allure of the Perranporth GC is the fact that each hole has a name, listed in two languages – English and the old Cornish language.

You begin play at the 1st hole — Vn Nans (Downhill).  You finish the front nine at the 9th hole which has a very appropriate name – Crib (Half Way) – since it is midway through the round.  You begin the back nine at the 10th hole — A-ves (Outward).  And, you finish at the 18th hole — Deweth (Finish).  The toughest hole on the course is the par five 14th — Gwella Braid (Braid’s Best).  The best named hole is the 2nd – Whym Wham, which translates to This Way and That.

FYI:  It’s worth noting that every par four at Perranporth is less than 400 yards and two of them are less than 300 yards.

The Budock Vean Golf Club was built on the same property as the Budock Vean Hotel, located on the outskirts of Falmouth.  This is a wonderfully designed nine-hole parkland golf course which has been constructed on rolling landscape, complemented by a beautiful mix of mature trees and flowering shrubs.  This course’s close proximity to the Atlantic Ocean and the Helford River also provide a refreshing breeze.

Even though the Budock Vean GC is a nine-hole layout, golfers are offered a genuine 18-hole experience, as there’s a different set of tees for the front nine and the back nine.  Not only is there a different set of tees for every hole, the distance of each hole is different from the distance of its back-nine ‘partner.’  And, every hole has a different name, as well, even though every hole on the front nine shares the same fairway and same green with its back-nine ‘partner.’  The names are special and creative, such as Hickman Hill (1st), John’s Joy (8th), Admiral’s Island (12th), and Little Beauty (17th).

One of the unique attributes of the Budock Vean Golf Club is that it has the second longest golf hole of any golf course in Cornwall—the 572-yard 16th hole, which is called A Lot of Money.  When you play this hole on the front nine, it’s the 7th hole, which measures a mere 518 yards and is called To Stokie’s Corner.

When played from the back tee, the 16th hole features a difficult tee shot since out-of-bounds lurks on both sides of the hole from tee to the green. Your second shot is hit to a downhill target as the fairway turns sharply to the right. Your approach shot to the putting surface is another downhill shot to the green which slopes away from the golfer.  The green is protected by bunkers on both sides.  If you have a wager on the 16th and you secure a birdie, you will probably win ‘A Lot of Money.’

“Although we are only nine holes, it is a cracking little course,” says Martin Barlow, owner, Budock Vean Hotel, which owns the Budock Vean Golf Club.  “In this day and age with golf having to fight harder than ever to attract new players both young and old, we have been working hard to promote the nine-hole game, now that that Golf England has permitted handicaps to be established over nine holes and for nine-hole competitions.”

FYI:  After playing golf at Budock Vean Golf Club, pamper yourself with a cream tea and a massage at the Natural Health Spa, at the Budock Vean Hotel, which is on-site.

The St. Enodoc Golf Club, located across the Camel Estuary in Rock, Cornwall, has all the characteristics of a true seaside links golf course – firm, consistent greens; undulating fairways; tight, uneven fairway lies; tough bunkers; a few blind shots; and many memorable and priceless seaside views of the River Camel estuary and the Atlantic Ocean.

At St. Enodoc, there are two courses:  the Church course designed by James Braid which opened in 1890 and the Holywell course, a shorter course which provides a typical links terrain with less daunting shots.

The Church course gets its name from the 11th Century St. Enodoc Church – an old Norman Church — which sits in the middle of the course alongside the 11th fairway.

The clubhouse at St. Enodoc has also been recently refurbished in a modern, New England style.  The clubhouse now boasts a bright, airy lounge area, restaurant and bar with a picture window overlooking the 18th green, and an elegant terrace for al fresco dining in the summer.

One of the biggest compliments that can be bestowed on St. Enodoc is that a few Open champions have come to play golf here at St. Enodoc. That list includes Braid, Henry Cotton, Jim Barnes and Tom Watson.

“It (the Church course) is a wonderful golf course,” says Watson.  “It has lots of variety and beautiful views everywhere you look.  It’s a great place to play golf.”

Watson is not alone in his praise of St. Enodoc, which celebrated its 125th anniversary in 2015.

Kudos to Braid whose design of St. Enodoc remains relevant to this day.

One of Braid’s most famous design features is the Himalaya bunker on the 6th hole.  It is reputedly the tallest sand bunker in Europe.  Avoid that hazard at all costs!

It’s worth noting that St. Enodoc has made a big investment in its second course, The Holywell, where tees have been upgraded, bunkers have been manicured and the overall presentation of the course has been upgraded to a level enjoyed on the main Church Course.

When you reach the 18th tee of the Church Course, pause and admire the view before striking your tee shot.  Without a doubt, Braid saved the best view for last at St. Enodoc.  Some golfers simply refer to that view as “unbelievable.”

If St. Enodoc is alluring to past Open champions like Braid, Cotton, Barnes, and Watson, it certainly should be for you.

FYI:  The golf media agree with the appeal of St. Enodoc as Golf Digest ranks the course as the 99th best in the world; Golf Journal lists St. Enodoc as the 51st best course in Europe; and National Club Golfer declares that St. Enodoc is the 17th best golf course in Great Britain & Ireland.