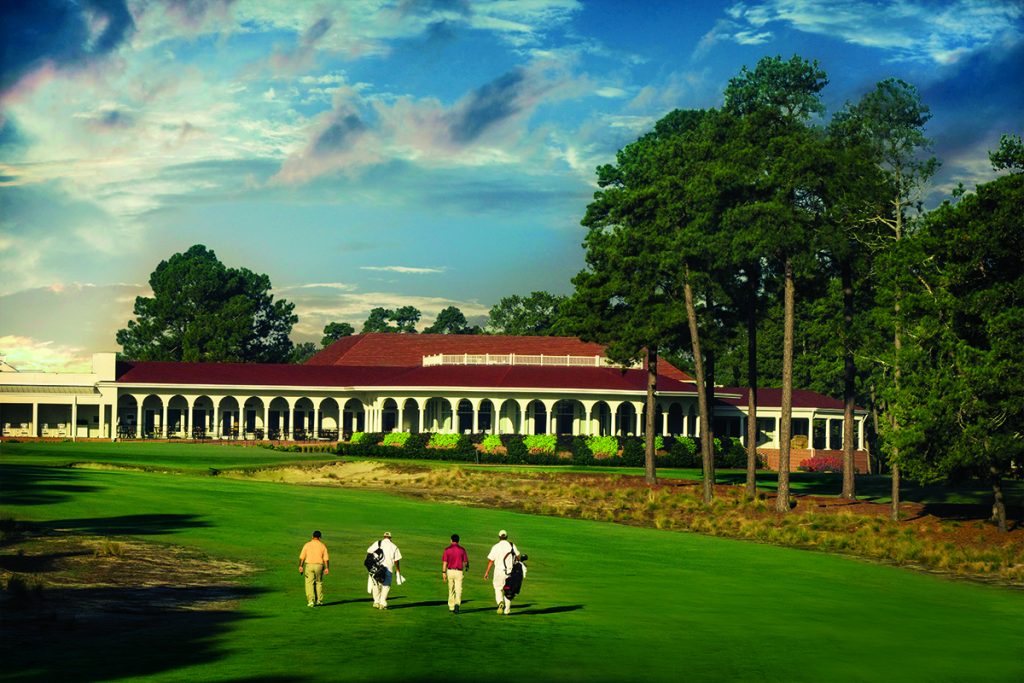 In its “Golf Town USA” series, GolfGuide.com is highlighting the cities, towns and regions across the U.S. in which golf is a way of life. We’ll feature must-play daily fee and resort courses, premier private clubs and other indelible connections to the golf industry.

The Pinehurst, Southern Pines and Aberdeen area is known simply as the Home of American Golf. Storied Pinehurst Resort, in the heart of the Village of Pinehurst, is dubbed the Cradle of American Golf. It also happens to be the largest golf property in the U.S., with nine 18-hole courses and a nine-hole short course.

The United States Golf Association (USGA) recently selected Pinehurst as the site for its second headquarters and named Pinehurst Resort’s No. 2 course an “Anchor Site” for the U.S. Open: it will host the championship in 2024, 2029, 2035, 2041 and 2047. Not to mention the litany of other tournaments held on both No. 2 and the resort’s equally challenging No. 4 course.

Golf companies and big brands like Golf Pride and U.S. Kids have headquarters and operations around this distinct region of the Old North State referred to simply as the Sandhills. Oh, and did we mention there are more than 30 courses within a 15-mile radius, including the highest concentration of those ranked on Golf Digest’s 100 Greatest Public list?

If there is a Golf Town to end all Golf Towns in the U.S. this collection of villages, hamlets and bustling small towns amid the longleaf pines and sandy soil of central North Carolina might just be it.

Must Play: Picking a must play course amid the Home of American Golf is like trying to pick just one favorite song by the Beatles, Eagles or Stones. So with that stated, we’ll select a few. If it’s a bucket list trip you seek, then both the aforementioned No. 2 and No. 4 at Pinehurst Resort more than fit the bill.

The former was restored to its original Donald Ross greatness by Bill Coore and Ben Crenshaw in 2011. The latter was reimagined by Gil Hanse in 2018 and has since co-hosted the prestigious U.S. Amateur and North and South. Played consecutively, this dynamic duo makes for one of the most formidable, and unforgettable, one-two punches in American golf.

Solid Seconds: Back at Pinehurst Resort, Tom Fazio’s No. 8, which commemorates the resort’s 100th anniversary, takes a backseat to no layout. In most “Golf Towns” it would be the marquee track, and legions of golfers rank it among the top five in the region.

Tobacco Road, wrought by “maverick” architect Mike Strantz, seems to get better with age. It’s a modern marvel that contrasts nicely with the region’s supply of classically designed venues and features many of the stunning features that led to Strantz’s cult following among architecture aficionados.

As far as convenient combos go, Talamore Golf Resort is situated about midway between the Village of Pinehurst and Southern Pines and presents two outstanding options in the Arnold Palmer-designed Mid South Club and Rees Jones designed New Course. And the resort’s villas are popular with traveling golfers.

Hidden Gem: Franz, who’s been keeping busy over the past five years with local projects, has been tapped to restore one of Ross’s first designs, Southern Pines Golf Club. Once it reopens later this year or in early 2022, it won’t be hidden for long … the Longleaf Golf and Family Club is a Dan Maples-designed gem owned by U.S. Kids Golf and is a “living laboratory” for junior golf and growing the game. In addition to the regulation 18 there’s a sporty par-3 course, Bottlebrush, that’s just $8 a round.

Preferred Private: There are a fistful of top-notch private clubs in the Sandhills. But for value, pedigree and stability, it’s hard to beat the Country Club of North Carolina. “CCNC’s” two 18-hole layouts, Dogwood and Cardinal, are ranked No. 5 and 17 respectively by the North Carolina Golf Panel.

Ellis Maples and Willard Byrd designed Dogwood, and Byrd and Robert Trent Jones Sr. crafted Cardinal. If it’s a pure golf experience / membership you seek, the Dormie Club delivers. The layout, designed by Coore and Crenshaw, is one of the top private designs in the country.

Dine out: When the Pinehurst Brewing Company opened in 2018, it instantly became a favorite among locals and visitors. Owned and operated by Pinehurst Resort, it’s also emerged as one of the region’s best BBQ joints, serving up pulled pork, baby back ribs and brisket … Drum and Quill is a must for any hardcore golfer – a modeled after a traditional Irish public house, and owned by Kevin Drum, son of legendary golf writer Bob Drum … for a big slab of meat and a rich bottle of cab, visit 1895 Grille in Pinehurst Resort’s Holly Inn … and speaking of breweries, there are other outstanding craft brew purveyors including Southern Pines Brewing Company, Hatchet Brewing and Railhouse Brewery, all owned / operated by military veterans.

411: Pinehurst, Southern Pines and Aberdeen are approximately 70 minutes from Raleigh-Durham International Airport, which offers direct flights from numerous cities. Charlotte Douglas International is two hours west and as an American hub, offers even more direct service. For golfers hitting the open road, the Sandhills are a day’s drive from most East Coast population centers.

Shane Sharphttp://www.southbound4.com
Shane Sharp is a longtime golf writer based in Greenville, S.C. In addition to running his content marketing business, Southbound 4, he's a regular contributor to GOLF Magazine, Golf Inc., Club Management and other golf magazines and websites.
RELATED ARTICLES
Other

Spring Lake Golf Resort – All the Trappings of Home and...