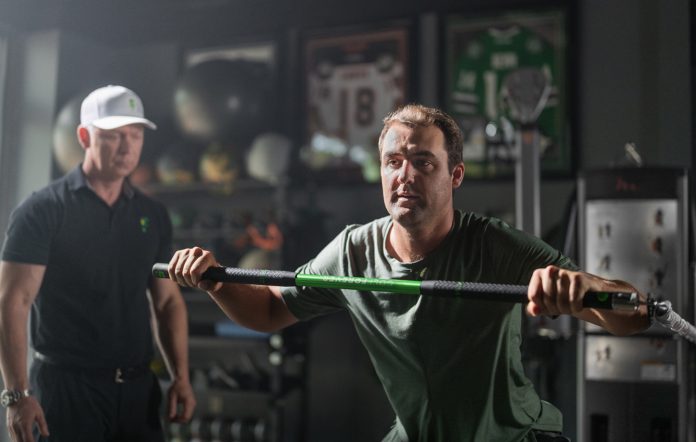 GOLFFOREVER, the leading at-home golf fitness training system that helps golfers play without limits, congratulates World-No. 1 golfer Scottie Scheffler on a breakthrough season that saw him win four times, be crowned The Masters champion, break the TOUR’s record for on-course earnings in a single season and, now, be named PGA TOUR Player of the Year bby his peers.

Scheffler, who began using the GOLFFOREVER Swing Trainer daily at home and on TOUR several weeks prior to his prodigious run of wins this season, appears in fitness training videos on GOLFFOREVER’s mobile-app video platform – alongside his longtime physical trainer and key GOLFFOREVER contributor Dr. Troy Van Biezen – and stars in television ads for the groundbreaking golf fitness system.

Since further dedicating himself to building strength, mobility, and stamina with Van Biezen, Scheffler has improved his game in key statistical categories, including Driving Distance (now averaging 311.6 yds vs. 305 yds in the previous season), Clubhead Speed (119.24 mph vs. 116.94 in the previous season), Strokes Gained: Total – 1.677 vs. .932 (jumping from 33rd to 5th on TOUR), as well as a testament to his ability to close: Fourth Round Scoring Average – 69.58 this season vs. 70.36.

“We’re proud to see Scottie Scheffler reach so many of his goals during his historic run on the PGA TOUR. He had one of the greatest seasons in modern golf history, and we’re very proud to have played a part in it,” said GOLFFOREVER founder and CEO Dr. Jeremy James. “Scottie’s impressive character and total commitment preparing his swing, mind and body for competition make him even more deserving of these incredible achievements. It’s a privilege to be affiliated with him and witness these great heights, which are only the beginning for this incredibly talented player.”

Scheffler, who ascended to the top of the Official World Golf Rankings in late March, has collected the first four victories of his professional career since he began regular use of GOLFFOREVER’s groundbreaking training system that pairs the first-ever multi-use golf fitness and warmup tool with video-streaming routines for flexibility, speed, power and injury recovery in the 4.8 App Store-rated GOLFFOREVER app.

His $14,046,910 million in 2021-22 on-course season earnings is the most ever collected by a single player in a PGA TOUR season. Between Official Money and bonus programs, Scheffler earned a total of $24,796,910. In addition to his four victories, Scheffler also finished runner-up four times and had 10 top-10s and 18 top 25s in this incredible run. He is the first golfer to ever to be named Player of the Year on the Korn Ferry Tour, PGA TOUR Rookie of the Year and win the Jack Nicklaus Award as PGA TOUR Player of the Year.

“It’s been an unbelievable ride this year and part of my success is no doubt due to the hard work I’ve put in with GOLFFOREVER. It’s a tool and approach that is critical to my preparation for the PGA Tour, and I respect GOLFFOREVER’s mission of helping all golfers improve their bodies and play their best with the same scientific approach as mine. I’m proud to be their ambassador and appreciate the great relationship,” Scheffler said.

GOLFFOREVER is the first golf-specific home training program to embrace the approach of home exercise equipment paired with streaming instruction. GOLFFOREVER customizes each golfer’s exercise routines specifically for them, based on a proprietary strength and flexibility test. GOLFFOREVER is safe and highly effective for any golfer.Dr. Van Biezen, a marquee instructor within the GOLFFOREVER platform, has worked with top players on the PGA Tour for the past 20 years like Jordan Spieth, Justin Thomas, GOLFFOREVER ambassador Ryan Palmer and Zach Johnson. He introduced Scheffler to the GOLFFOREVER product during its soft-launch in November, and the pair have since developed a variety of pre-round warmups, flexibility routines and strength workouts that Scheffler follows religiously, including during the week of his three-stroke victory at Augusta National.

Share
Facebook
Twitter
Linkedin
Email
Previous articlePXG Enters the Shaft Market with the Introduction of Its All-New PXG® M16TM Putter Shaft
Next articleThe Carolinas: Center of the Golf World During the Presidents Cup

Energy Bars on The Golf Course

Faldo, Player, Rice, Kelly To Participate In The Inaugural “Match” To Benefit Project Golf On April 29