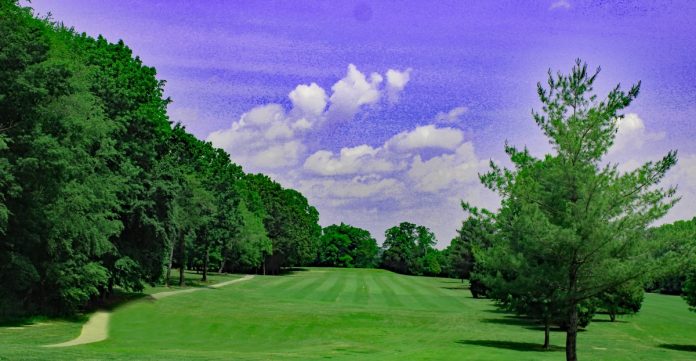 Most golfers who have followed the PGA TOUR for any length of time are familiar with the name Kenny Perry, after all, he’s won more than 20 professional tournaments on the PGA and PGA Champions Tours. What they may not be aware of is a golf course that Kenny designed and built; he still owns it to this day. I’m talking about Kenny Perry’s Country Creek Golf Course in his hometown of Franklin, KY.

Perry literally grew up at Franklin Country Club; his family lived on the golf course. While it was great to have easy access to the course, it frustrated Kenny that it was a private club, which prevented him from inviting friends that weren’t members. He vowed that if he ever made it as a professional golfer, he was going to build a public golf course in Franklin KY where everyone would be welcome. 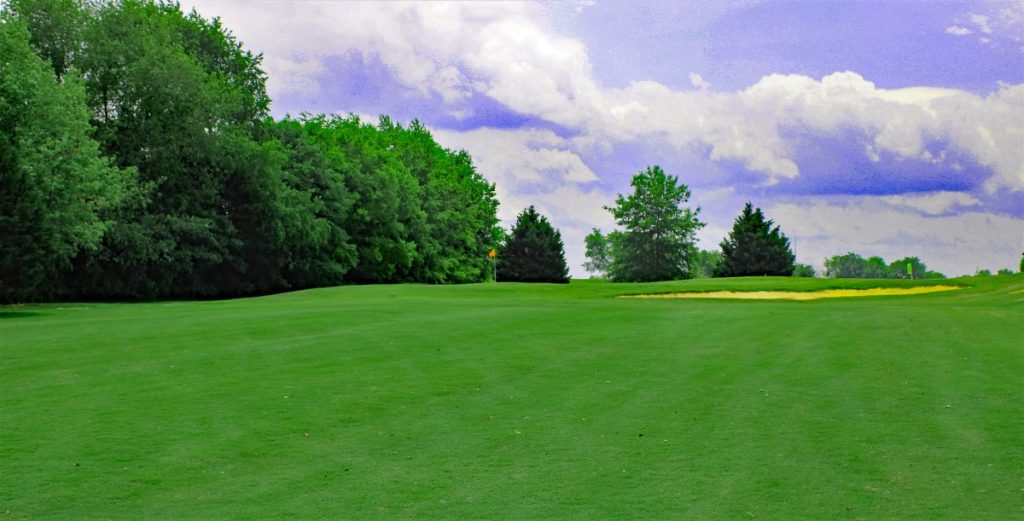 Kenny spent his high school years golfing at Paxton Park in Paducah, KY, a local municipal course that he loved. When building Country Creek, his goal was to create a course like Paxton Park in Franklin, KY. Perry intentionally designed a friendly, enjoyable course that the average golfer could play in a reasonable amount of time.

Construction of the golf course began in 1992 and it officially opened for play in 1995. Country Creek is built on 300 acres of rolling Kentucky hillside in Franklin, KY. Fairways and greens are vibrant green, lush, and healthy. As Perry says, “There are some tough holes, some drivable holes, and some easy holes. The golf course won’t beat you up; at least it’s not designed to.” Because it is designed for high handicappers in the 15 – 30 range, there is very little trouble on the right side of most holes, making it very slicer friendly.  He accomplished his goal of making the course affordable and accessible to everyone with a weekend rate of only $42.00 and an average 18-hole play time of 4 hours and 15 minutes.

Kenny Perry’s Country Creek Golf Couse has several memorable holes. If I were naming holes, Number 2 would be called “Deception.” It’s a short, 294-yard par 4. The thing about this hole is that the fairway slopes to the right and there are several trees in the landing area; trees that tend to keep golf balls. Keep your ball in play off the tee and you’ll be looking at a short pitch shot into a well-elevated green. There are only a few bunkers on the entire course and two of them guard the right side of this green!

Number 7 is a short, 470-yard par 5 dogleg left. Most amateur golfers will be best suited to play their tee shot down the right side of the fairway. That will leave a downhill approach shot with a long to mid-iron into a green that slopes front to back. There is a lake behind the green so going long is not an option. From the White Tees, the hole is short and will give up low numbers.

Course knowledge is everything. When I finally caught up with Kenny Perry, he was heading to the 7th tee. To the left of the fairway are a lot of large trees and a barn that has been there since before he bought the property. For most players, your tee shot is a blind shot – unless you’re the guy who built the course and knows where to hit it. Perry took a line directly over the barn and the trees and after he hit it, he knew it was somewhere up around the green. It was a line that the average golfer wouldn’t consider – let alone try and pull off! 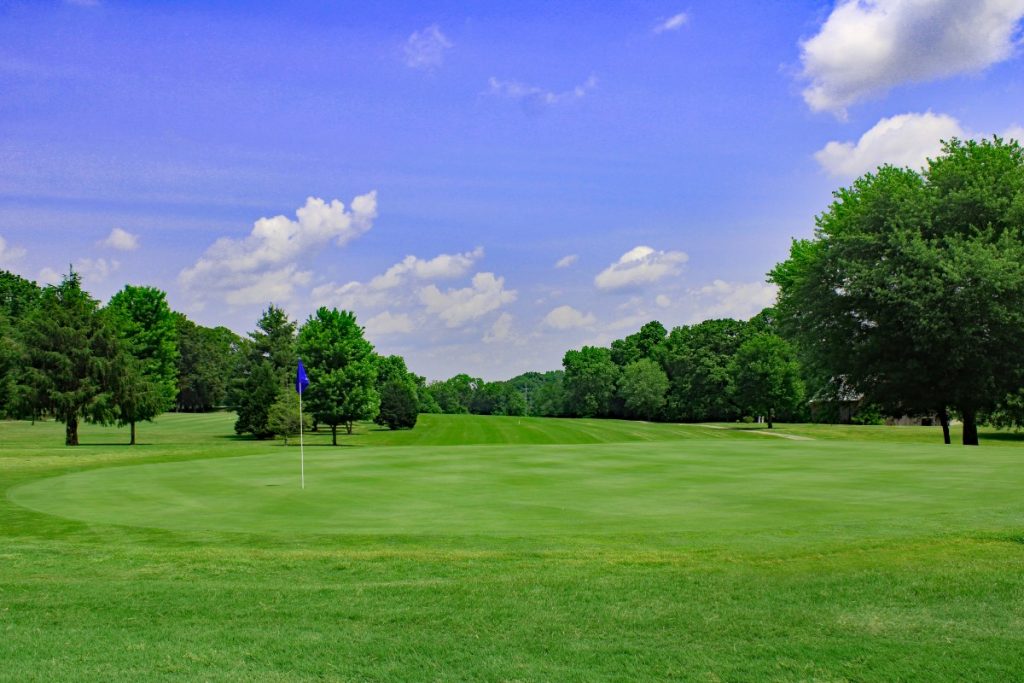 The par 3 8th hole plays 199 yards from the Blue Tees. From back here there doesn’t seem to be anything between you and the green; it’s just a long tee shot. Move up to the White Tees (137 yards) and the lake in front of the green comes into full view. Regardless of where you play from, hit a good tee shot and you’ll be saying “What water?” The green is shallow, so distance control is important. Par is a good score here.

Number 10 is a legitimate par 5. This 473-yard (White Tees) dogleg left starts with a tee shot over a ravine, then it’s two more shots straight away to the green. Hit it straight, keep the ball in play and you can score well.

Number 12 is an interesting tee shot from an elevated tee over a ravine and downhill to a wide-open fairway. From there it’s a short chip shot to an elevated green. 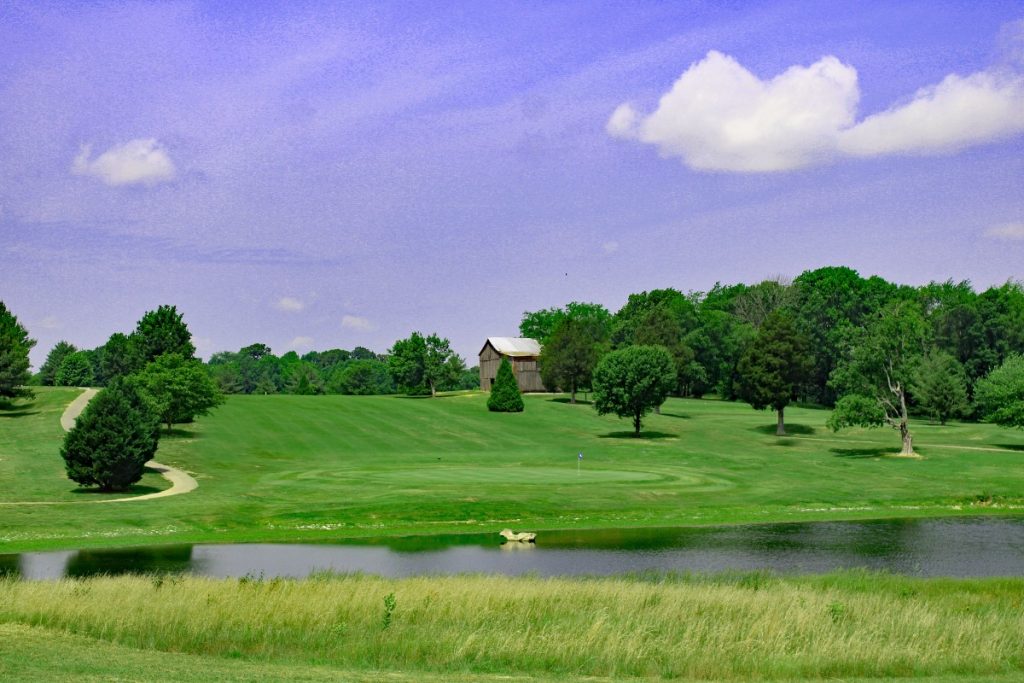 The finishing hole is a 399-yard par 4 that’s a slight dogleg left. Your tee shot plays slightly downhill and then your approach is slightly uphill into a large green that slopes back to front. It’s a fitting end to a great day and also rated the toughest hole on the backside.

Director of Golf Operations, Marty Sharer, is who Perry credits with resurrecting the golf course when they were going through some lean times. Sharer also serves on the County’s Tourism board. The Franklin area is primarily known for three things: The Mint Gaming Hall, which also features a horse racing track, the Dueling Grounds Bourbon Distillery, and Kenny Perry’s Country Creek Golf Course.

People come from all over to play this golf course and why not? It’s a lot of fun for the average golfer. According to Sharer, they get a lot of play in the spring from northerners who are looking to get on a course after being cooped up for the winter without having to drive to Florida. And with gas prices the way they are these days, who can blame them?

Sharer is often asked about the stay and play packages, but unfortunately, they are not aligned with any other courses or hotels at this time. But look for that to change in the future. Sharer’s parents own The Arling, a wedding and event venue next door, and they plan on building a few cottages for their wedding business. Golf packages could help keep them occupied during the week.

The golf course is open year-round, excluding Thanksgiving and Christmas, weather permitting. Winter golfers are typically Canadians and those from the northern states that drive south just far enough to play golf without making the pilgrimage to Florida. The course is right off Interstate 65 about 45 minutes from downtown Nashville.

For more information on Kenny Perry’s Country Creek Golf Course or to book your next round of golf, visit them online at www.kpcountrycreek.com.