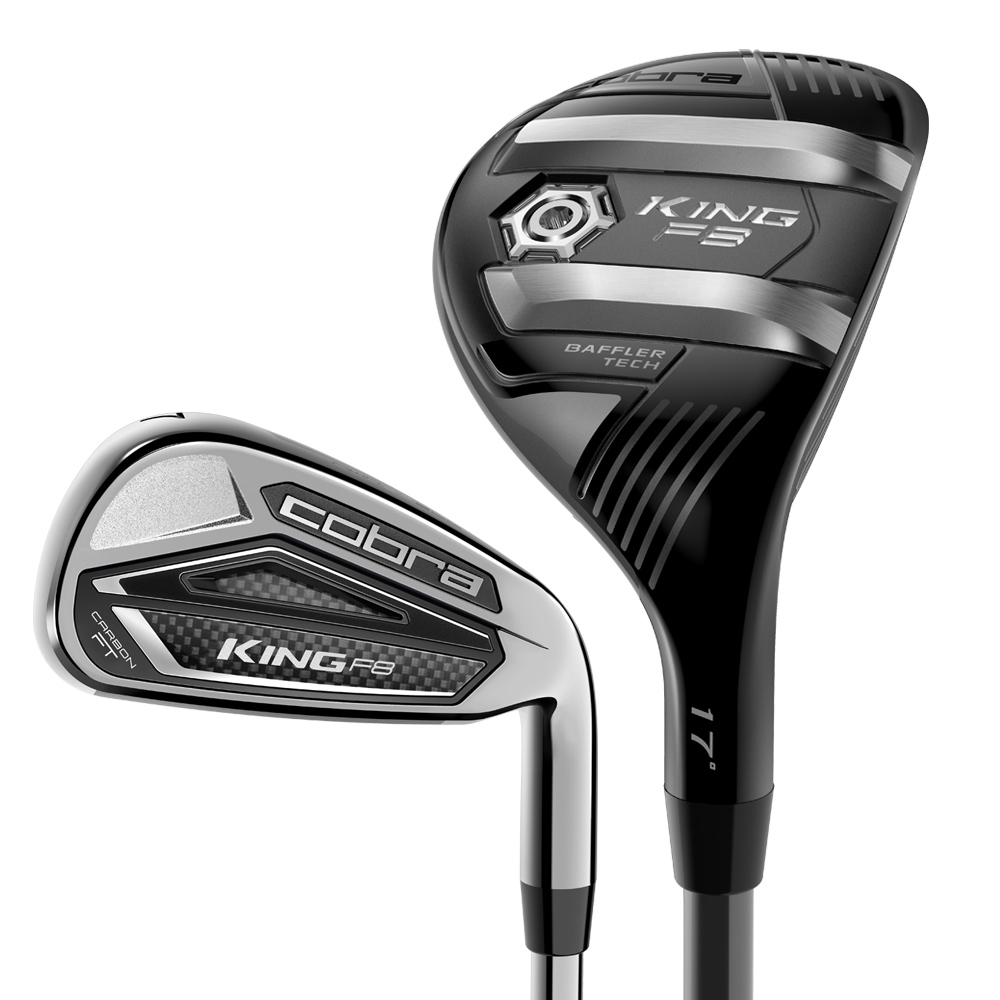 As with most golf equipment manufacturers, the PGA Merchandise Show in Orlando, FL serves as a springboard to introduce new gear. Cobra Golf was no exception. In addition to new lines of men’s and women’s golf apparel through their PUMA brand, Cobra introduced their latest golf equipment: the F8 line of drivers, woods, hybrids and irons.

The KING COBRA F8 lineup is the industry’s first electronically enabled hybrid/iron set. These innovative irons and hybrids work in unison with COBRA CONNECT Technology. Developed in conjunction with Arccos, these clubs deliver not only exceptional performance, they allow players to track their distance, accuracy and improvement from round to round. By connecting to the Arccos 360 mobile app, players of all skill levels can make smarter, data-driven decisions. As a bonus, Cobra is offering additional sensors at no charge for the clubs in your bag that are not equipped with this technology when you purchase a set of F8 irons.

But that’s not all that’s new with the F8. The KING COBRA F8 hybrid offers speed and stability from just about any lie on the golf course. A reengineered baffler rail design offers faster, tighter spaced rails, which are more centered around the club’s center of gravity. This reduces twisting at impact for improved stability and consistency. The rails are a little taller than on previous models; this adds to the bounce on the leading edge and prevents the clubhead from digging into the turf. As a result, the F8 hybrid glides effortlessly through the turf.

A faster PWRSHELL face design is paired with 100% carbon fiber medallions to deliver the ultimate fusion of distance and a soft, yet solid feel not typically found in a hybrid. The low CG design of the KING F8 hybrid delivers more speed and forgiveness, making it the perfect substitute for long irons in the set.

Another component of this improved clubhead design is a multi-directional crown with aero trips. The aero trips are designed to optimize the aerodynamic performance and deliver faster clubhead speeds and increased distance. They are made from a lightweight polymer, which is 10% lighter than titanium, allowing weight to be saved in an effort to maintain a low center of gravity. A fixed weight is positioned low and back, resulting in a high, towering ball flight that is extremely forgiving. Lastly, a thin, high-strength forged 455 stainless steel face construction maximizes deflection for increased ball speeds and distance on both center and off-center hits.

In addition to the addition of COBRA CONNECT, a lot of advanced construction technology went in to creating the KING COBRA F8 irons. These progressive irons deliver tailored performance throughout the set and feature COBRA’s patented E9 Technology. This new technology expands the club’s sweet spot by as much as 30 percent by considering all of the areas on the clubface where golfers tend hit the ball. It’s the smartest clubface on the market!

In this progressive iron set, the 4 – 7 irons have a full hollow design, lowering the CG and creating a high responsive face for increased launch and speed. The 8-iron through PW have a cavity back design for better accuracy on approach shots. In the specialty wedges (GW, SW, LW) the carbon fiber insert dampens vibrations and creates incredible feel around the greens.

Once again, Cobra pays particular attention to the milled grooves in each progression of the irons. All grooves are CNC milled which creates more precise groove structures. This results in optimum spin and trajectory characteristics for the long irons, mid to scoring irons and wedges. The long irons feature milled V-grooves which deliver reduced spin for maximum distance and flight time. The 8-iron through PW have milled U-grooves to optimize spin, resulting in improved control and more accurate approach shots. The specialty irons have wedge-spaced grooves, which deliver increased spin for more precise shots around the green.

If you struggle to hit your long irons, the KING COBRA F8 Combo Set is the ideal setup to gap your game perfectly. The combination of irons and a forgiving F8 hybrid come in one easy-to-hit set. Off the rack, the set consists of a 5H, 6-PW and a GW; 7 clubs in all. The KING COBRA F8 Combo clubs are available with either graphite or steel shafts. Aldila Rogue Pro 75 or Pro 65 shafts are available in regular, stiff or lite/senior flexes. If you prefer steel shafts, True Temper’s XP 90 are the stock shafts and are available in either regular or stiff. One other choice you’ll need to make is either variable length or one length a la Bryson DeChambeau. Retail price for the combo set is $999, $799 in steel.

The new KING COBRA F8 combo irons are perfect for golfers with handicaps from 5 to 25, with better than average swing speeds, who are looking for an easy to hit combo set that offers high launch, maximum distance and forgiveness. To see these irons for yourself and give them a try, visit your local COBRA dealer or you can get more information from their website, www.cobragolf.com.