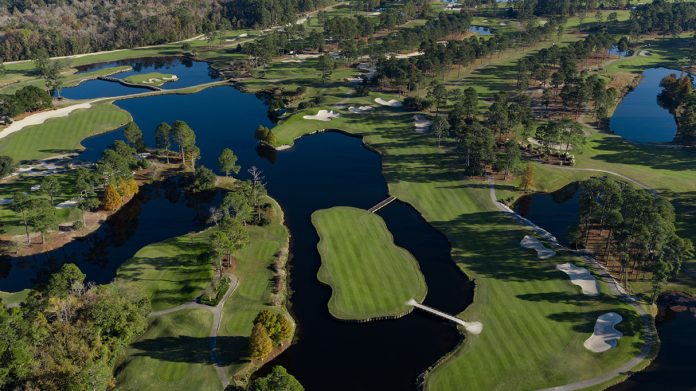 When King’s North at Myrtle Beach National and TPC Myrtle Beach opened in 1996 and 1999, respectively, the Grand Strand golf scene was absolutely on fire. Heck, it was even unstoppable, according to many industry experts, including the National Golf Foundation.

But we all know how that story goes. Building a “course a day” to placate the demand for tee times, golf course homes and resort rounds inevitably collided with the “Great Recession” to create one big national golf supply chain “whoops.”

Over the next decade, hundreds of courses around the country closed. Myrtle Beach was no exception; the official course count quickly went from110 to less than 90. King’s North and TPC Myrtle Beach, however, would have none of that.

These two layouts that opened within three years of each other and are situated just 25-minutes apart aren’t just “still standing,” to quote Elton John; they’re flourishing amid golf’s renaissance. Founder’s Group International acquired both venues over the past decade and operates and them at high level that keeps golfers from all over the U.S. coming back year after year.

Conditions notwithstanding, King’s North’s calling card over the years has been the bold nature of its design. The Arnold Palmer Design Company knew good and well that high-end courses along the Grand Strand had to stand out to attract golfers among 100-plus others.

Right out of the gate, King’s North offers up the nearly drivable par-4 third hole, which plays anywhere from 266 to 365 yards from the men’s tees. Then there’s the famous par-5 sixth hole, famously dubbed “The Gambler,” with its unique island fairway on the left side that offers a shortcut to the green for a shot at eagle.

The balance of the layout is just as beguiling as Palmer’s lead designers Ed Seay and Victoria Martz mix and match design features to keep golfers guessing. Due to the routing, most holes shift right to left, favoring the minority of golfers who can draw the ball. But there are plenty of opportunities for all sorts of shot types throughout the 7,017-yard circuit.

The back nine is highlighted by the 140-yard par-3 12th hole, with its island green and “S.C.” shaped bunkers left of the green. The cart path runs behind the green and connects golfers to something of a barrier island that serves as the tee box for the 13th hole.

Sending golfers off with an unforgettable parting shot has always been “a thing” in Myrtle Beach, and King’s North doesn’t disappoint. The par-4 18th hole features 43 bunkers sprinkled along both sides of the fairway and around the left and back portion of the green. Water guard the right side, making this 464-yard two-shotter one of the hardest finishing holes at the beach.

The ride south to Murrells Inlet and TPC Myrtle Beach is quick and smooth these days along Highway 31. If there’s any course that’s weathered golf’s ups and downs over the years, it’s this Tom Fazio-designed gem tucked amid the lagoons, live oaks and palmettos of the South Strand.

Having carried the “TPC” moniker since its opening, and as the former host course of the Senior (now Champions) Tour Championship, TPC Myrtle Beach has always been held to a higher standard than most Myrtle Beach area courses. Today, as the No. 12 ranked course in South Carolina according to Golfweek, it still delivers.

As one would expect from the brand, there’s a TOUR-caliber conditioning standard from the practice tee and putting green to all 18 holes on the course. The original greens were replaced with Champion Bermuda and greenside bunkers refurbished with new sand and drainage. When coupled with the pristine conditioning of the fairways, rough and edges, TPC Myrtle Beach stands as one of best-maintained venues in the state.

Fazio designed TPC Myrtle Beach for stroke play, and when Tom Watson won the Senior Tour Championship here in 2000 the course acquitted itself wonderfully as the Hall of Famer and eight-time major winner bested John Jacobs by one stroke. However, the layout sets up perfectly for match play, especially with holes like the behemoth 472-yard par-4 ninth and the par-5 18th, with trees, water sand and sheer length all in play.

One thing that hasn’t changed in Myrtle Beach over the past 20 years – golf packages are still the most popular way to book rounds and rooms. King’s North, TPC Myrtle Beach and dozens of other courses and lodging options are available via www.myrtlebeachtrips.com and www.mbn.com. Getting to the Grand Strand is easier than ever with 50 direct flights offered to and from Myrtle Beach International Airport.