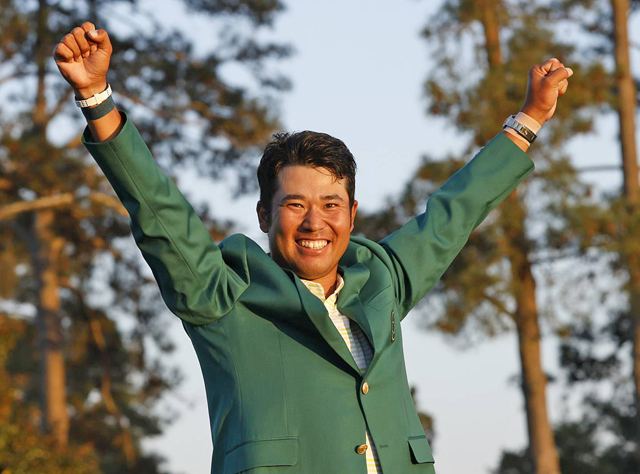 A few observations from the 85th Masters won by Hideki Matsuyama the first native of Japan to win a men’s major championship posting 10 under par compared with Dustin Johnson’s 20 under par last November.

Scoring this week, well within the range of past Masters, would seem to answer Augusta National chairman Fred Ridley’s concern over the distance players are hitting the ball citing the worn-out reasoning major championship venues would have to be 8,000 yards to contain the big hitters. It is well to remember Ridley served a term as president of the United States Golf Association, the organization that has been pressing to roll back the ball and by so doing somehow grow participation in the game or at least help it survive.

As a compelling sports event the Masters is way better in April than November and fans do make a difference…in fact the challenging course with fans (excuse me, patrons) present are what make the event special–no explanation needed. A limited number of spectators were allowed (some even were seen wearing masks!) and their enthusiasm, applause and cheering plus some un-Masters-like yelling were in sharp contrast to the silence in the fall.

The lack of stands allowed drone cameras to show unfamiliar vistas and gave television viewers a much stronger sense of the very hilly topography. Unhappily the almost reverential tone of commentators still leaves many listeners reaching for the mute button while stifling a yawn.

Despite Saturday’s rain, firm and fast course conditions brought out the best in Augusta National…and in the players. The overly wet fairways and spongy greens of November when Johnson set the tournament scoring record were a pandemic-induced scheduling anomaly.

Certain view-with-alarmers opined strongman Bryson DeChambeau would overpower Augusta and Las Vegas sports books established him along with defending champion Johnson as favorites at 19/2. Not only didn’t DeChambeau overpower the course he finished 15 shots behind Matsuyama in a T46. Johnson, world number one and also a long hitter, did not make the cut.

Tiger Woods was not there and may never be again depending on his recovery from the February 23 automobile accident. The 15-time major champion has not revealed much regarding his condition nor prognosis.

After Jordan Spieth won for the first time in almost four years some were dewy-eyed over prospects the personable Texan would don his second green jacket, but then I feel the same way each year about Phil Mickelson taking his fourth. Lefty went off at 160/1 and could only get to even par for the week and a T21. Vegas put Spieth at 11/1. His play was solid even showing flashes of the old Jordan that thrilled us. Spieth finished in a tie for third three shots shy of Matsuyama.

Walking Augusta’s hills this week must have been agony for Bruce Koepka who had knee surgery last month and did not exhibit much of the fire seen in the past. Rory McIlroy had a Masters to forget with poor play that included a green-missing approach shot at the seventh on Thursday that hit his spectating father. McIlroy never had the chance of making the cut.

Overall, this Masters again proved a great course will always challenge the world’s best players and being leery of odds for wagering is a safe idea. Matsuyama went off on Thursday at 46/1.