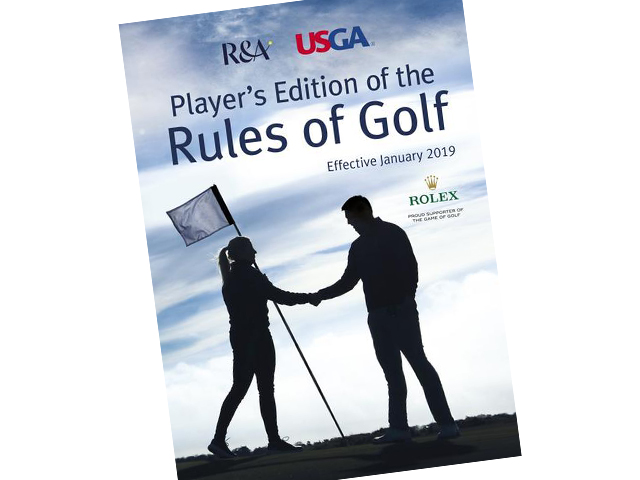 The other day it occurred to me that like lots of others I didn’t know as much as I should about the January 1 changes to the Rules of Golf. So, after some research here’s my view of the most important new rules we need to know before heading to the first tee after the first of the year.

First of all, compared to the old copy hiding under that moldy rain jacket in the outside pocket of your bag the primary differences in the 2019 edition are the wording used is less convoluted, more understandable (hurray!) and there are ten fewer rules (amazing!). Both the full edition and the smaller Player’s Edition have illustrations to explain definitions and options.

And in case you were worried about where to find the minutiae of rules decisions that weighed down the previous rule book there is an Official Guide to the Rules of Golf to be published in November. It will have the Rules of Golf with Interpretations [decisions], Committee Procedures and the Modified Rules of Golf for Players with Disabilities. To make everything even more convenient and to encourage referring to the Rules while playing, there are free Android and iPhone apps. 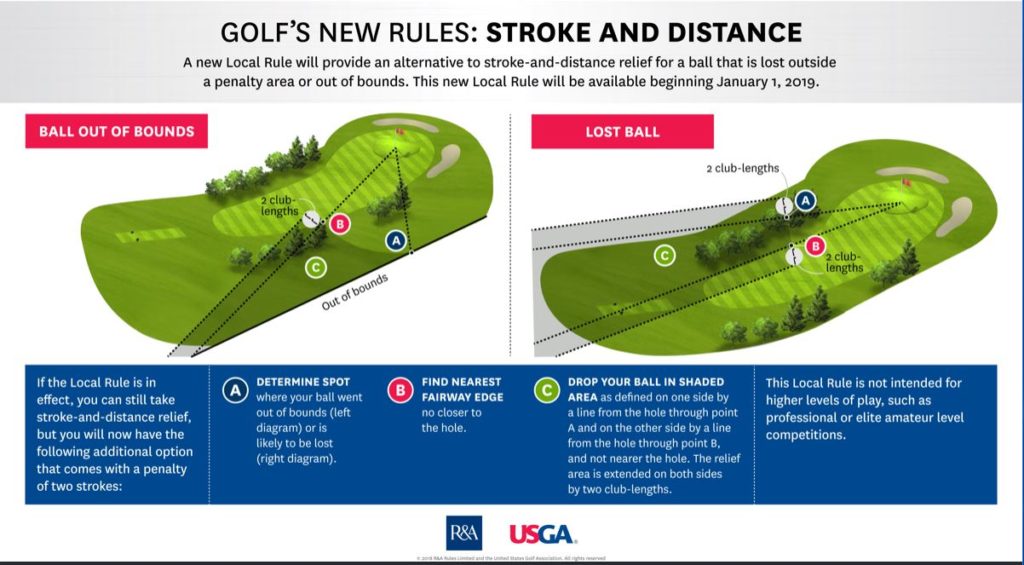 With all that preamble out of the way here is my take on the changes most effecting every day play:

-Three minutes to search for a ball rather than five instituted to improve the pace of play but somehow it seems unlikely to help
-There are no more hazards just penalty areas and if you ground your club there’s no penalty just don’t do it near the ball. Keep in mind bunkers are not penalty areas but loose impediments are movable in both
-When dropping a ball it is no longer required from the shoulder but from the knee which should make it more likely to get a good lie (I well when the rule called for facing away from the hole and then dropping over your shoulder!)
-The “DJ rule” is retained. There is no penalty for the ball accidently moving on the green. Spike marks may be tapped down which depending on a player’s diligence could hold up play but for a real help speeding play it’s now OK to leave the flagstick in when putting
-When taking relief, the point where the ball may be dropped is determined by the longest club in your bag. Depending on the reason for the drop the distance is still one or two club lengths

The single biggest change though and a real boon to the average weekend golfer is a local rule covering a lost ball or one out of bounds. If the new rule is in effect, no longer will you trudge back to the tee after that 300-yard blast barely snuck OB or was permanently hidden in thigh-high fescue. It will be allowable to dropping a ball near where the previous shot was lost or out of bounds. There’s a penalty of two strokes but that’s lots better than a trip back to the tee…which no one did any way.

The one rule that should have been revised, namely getting relief from divots in the fairway, wasn’t. This is a common occurrence and unfair in effect to penalize a player for hitting his or her shot in the short grass. Too bad the folks at Far Hills don’t agree but that’s another whole discussion.