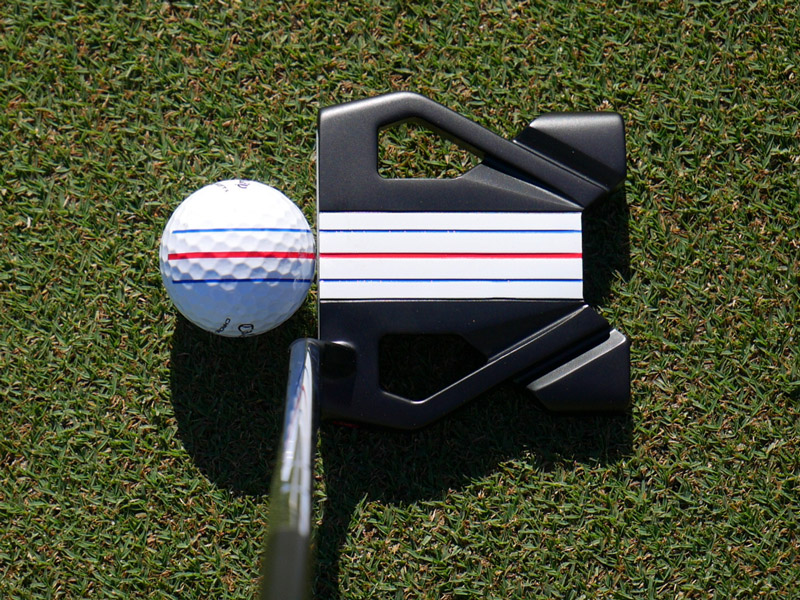 Odyssey putters are both the best-selling brand and the winningest putters in the world!

Odyssey has 7 new Triple Track models that feature both a putter and, in reality, an alignment tool and putter. Very clever, especially as the majority of a golfer’s biggest problem is that of alignment.

The Triple Track technology is based upon a theory called Vernier Hyper Acuity, which is the same visual technology used to land planes on aircraft carriers. Three horizontal stripes on the top of the putter head, on a white background, line up with the lines on the golf ball. Odyssey says that the Triple Track Technology improves directional aim by 11%. Works for me!

Coupled with either the Callaway ERC or Chrome Soft X triple Track balls, one’s focus is as concentrated as one can expect with ready-made aiming, face position and alignment.

How does this all work? Select a target for your putt, for example the right edge of the cup, and then pick an intermediate target between the right edge of the cup and your ball. Line up the ball to those points, and then once you put the putter head down at address, ensure that those lines match the ball lines and you should be aimed right where you planned. This assumes you have read the green correctly and have the right speed to sink the putt.

The Ten S model, as do the other models, feature Odyssey’s Microface Star face insert. This insert is firmer than previous inserts and definitely enhances both feel and sound at impact. The Ten mallet style putter has two weights placed on the rear of the putter, looks very similar to the TMAG Spider putter and is following the trend of increasing the MOI (Moment of Inertia) and “rear wing” looks.

The majority of our testing group appreciated the alignment aid and how their eyes were attracted towards the Tripe Track section. It concentrated their mind on the center of the face and made it easier for them to commit to the line of the putt. All good to improve one’s putting! They also commented on the sturdiness and minimal face rotation of the Ten.

The Stroke Lab shaft used in the Ten S and all other Triple Track putters, is very different from most putter shafts. The Stroke Lab shaft is a full 40 grams lighter, made possible by an innovative new multi-material shaft design that combines a graphite body with a steel tip to net out at just 75g, with most of the mass concentrated in the tip. Odyssey has redistributed that saved weight by adding 10g to the head in the form of two sole weights, and adding 30g to the grip-end via a 10g-lighter grip and 40g end-weight.

One of the major benefits of this weighting system is that the feel for the putter head becomes more acute, helping the golfer repeat the same, smooth stroke time after time.

Barry Lotz,J.D.,Ph.D.
Barry Lotz, J.D., Ph.D. is the director of the Professional Golf Teachers Association of America. He is a member of the Golf Writers Association of America, the California Golf Writers Association, and serves both as a Consultant and Mediator to the golf industry. He is also the author of numerous books, including “333 Best Web Sites for Golfers”, “How to Build Business Relationships through Golf” which is in the Top Ten Golf Business Book’s bestseller list. His latest book,” The Right Mind for Golf” is now in its 9th printing. He currently works with 14 Tour Players on mental coaching, putting and scoring techniques.
RELATED ARTICLES
Golf Balls