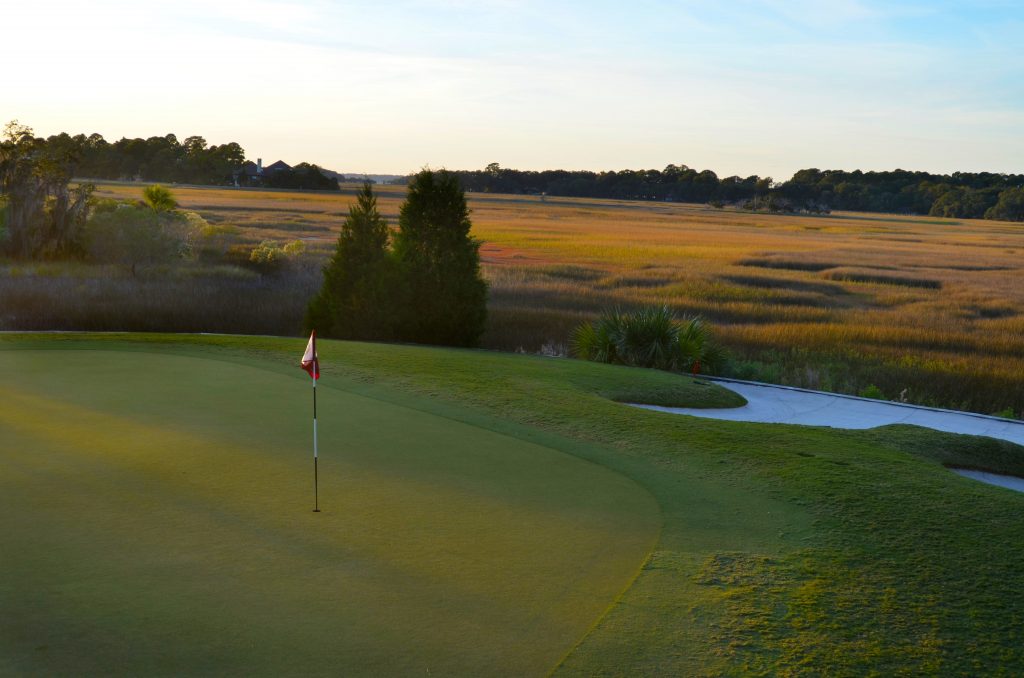 In 2019, more than 135,000 people made their way through the Sea Pines gates on Hilton Head Island’s southern end to attend the RBC Heritage, one of the PGA TOUR’s most beloved events.

This year – for the rescheduled, fan-free edition held June 18-21 – that number will likely be in the hundreds, including players, caddies, tournament official and select media.

It will feel surreal, says Sea Pines Country Club General Manager Robbie Ames, to not have tour buses stuffed with thousands of adoring fans driving by his club every five minutes on their way to what many will tell you is the real ‘largest cocktail party in the South.’

“That was one of our best marketing tools,” says Ames, only half joking.

Even after the golf gods peeled back a layer to reveal one of this island’s hidden golf gems, most assumed they were looking at Harbour Town, or one of the resort’s other two courses, Heron Point by Pete Dye and Atlantic Dunes by Davis Love III.

They are to be forgiven, however, as the club is situated just inside the Sea Pines gates and its Club Course, originally designed by Arnold Palmer and Frances Duane in 1973, has often been referred to by members over the years as “Little Harbour Town.”

Home to more than 800 memberships, Sea Pines Country Club is tucked between Governors Road and an expansive tidal marsh connecting to the Calibogue Sound. In addition to golf, the club has one of the island’s best tennis facilities and (following a multi-million-dollar expansion) a brand-new fitness center.

“Most of our members started out visiting Hilton Head for a week, then a month, then part of the year and ultimately decided this slice of heaven is where they wanted to be year-round,” Ames says.

And you’d be mistaken if you assumed these “snow birds” were all retirees, according to Ames. With the rising trend of working from home, Sea Pines Country Club is attracting its fair share of young professionals and families who have the freedom to live where they choose.

“The make-up of our club, and clubs throughout the U.S., is changing dramatically,” Ames says. “It creates an amazing energy and vibe that private clubs didn’t have 10 or 15 years ago.”

Just as the PGA TOUR players love Harbour Town, members have a strong affinity for their home course. In fact, despite the inherent differences between Arnold Palmer and Pete Dye’s design trademarks, the two layouts share frequent comparisons and even common guests.

“Players used to sneak in a practice round on the Club Course or use the practice range because space was limited at Harbour Town,” says Ames. “Augusta National is spacious compared to Harbour Town, and players would need to adjust their games in a hurry.”

And Ames should know – a PGA professional himself, he was a caddie on the PGA Tour for his older brother Stephen from 2003-2006, including at the (then) MCI Heritage in 2004 and 2005, where Stephen tied for seventh and sixth, respectively.

According to local lore, Vijay Singh, Jeff Maggert, Brad Faxon and several other players made regular stops at the Club Course to sneak in a round if they weren’t playing in the Wednesday Pro-Am.

Now it is Stephen who sneaks in more than the occasional round on the Club Course, as he’s been “golfing in place” during the Covid-19 crisis in lieu of returning home to Canada. He is currently 10th in the Champions Tours’ Charles Schwab Cup rankings and at age 54 has emerged as a force to be reckoned with on the senior circuit.

“The Club Course is a quintessential example of Lowcountry golf course design,” says the elder Ames. “It has narrow, tree-lined fairways, a high percentage of doglegs, subtle green complexes and lagoons. There’s a sense of intrigue on every tee box as to what comes next.”

Over the years, a crop of members took to referring to the course as “Little Harbour Town” due to its similarities to the Pete Dye, Jack Nicklaus masterpiece just a sand wedge to the south. Local golf course architect Clyde Johnston, who renovated the Club Course in 2001, says the tagline isn’t just hyperbole.

“The hole corridors, fairway widths and turning points for doglegs feel similar [to Harbour Town],” says Johnston. “Believe it or not, the fairway widths at the Club Course are fairly standard for the time, 30 yards or so. They feel tighter because of the tree lines.”

At Harbour Town, fairway widths of 25 yards are common, and tree chutes often constrict openings to 20 yards, like on the par-4 first hole. A quarter of the holes on the Club Course are considered doglegs, a similar number to Harbour Town.

While it doesn’t possess Dye’s trademark waste bunkers or bulkheads, Johnston says the placement and angles of green complexes, especially on par 3s, is similar on both courses.

“The par-3 11th hole is a nifty one-shotter with two live oaks framing the hole and coming into play,” he says. “It’s the easiest hole on the course, but it reminds people of Dye and Nicklaus’s par 3s at Harbour Town.”

Ames says the club has been cautious and respectful of all national and state guidelines as it has reopened, and is even offering a fully immersive virtual tour as an engaging and safe way to explore its clubhouse, core amenities and myriad lifestyle activities.

“The virtual tour gives our members a way to see their club like they’ve never seen it before,” says Ames. “And for those wishing to learn more about our club – whether they’re on the island or out of state – it is a fun, informative and safe way to check us out.”