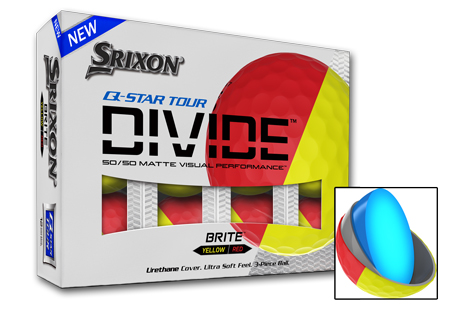 Srixon’s Q-Star Tour Divide, in an eye-catching half yellow and half red matte urethane 338-dimple cover is a more visible version of the original Q-Star Tour model.

WYNTK
Two tone golf balls have not been around for three or four decades, but Srixon’s Q-Star Tour Divide is certainly worth a look since, other than the coloring, it is the Q-Star Tour that so many players are using.

“The new Q-STAR TOUR DIVIDE looks great, but it’s so much more than that,” said Brian Schielke, General Manager at Srixon. “Easier putting alignment and increased visual feedback on your chip and pitch shots really adds to the greenside performance. It’s a ball every golfer must try.”

The FastLayer Core is soft towards the center but firmer nearer the outer edge complemented by the mantle layer which is very resilient. The thermoplastic urethane cover provides greenside control and has color all the way through, not just painted on.

Besides the increased visibility however, the red-yellow dividing line is a convenient way to align the ball when putting.