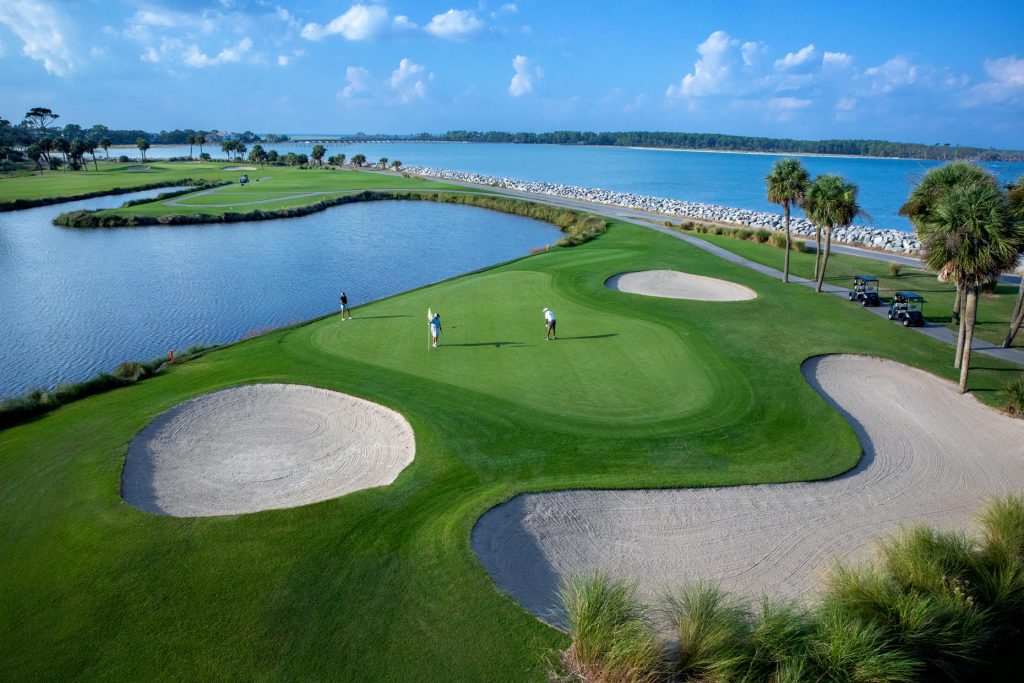 There are certain golf destinations that fly under the radar. Some are just remote enough to keep them off the golf media’s grid, while others prefer to quietly go about the business of providing golfers an unforgettable experience.

Fripp Island Golf and Beach Resort is a little bit of both.

The most seaward of South Carolina’s Sea Islands, Fripp Island is 18 miles east of historic Beaufort, where novelist Pat Conroy spent his summers. It’s not hard to reach, by modern standards, but getting there does require a bit of island-hopping across Ladys, St. Helena and Hunting Islands to the end of scenic U.S. 21.

This is the former home of pirates and privateers, so one wouldn’t expect this golf treasure of the Palmetto State to be conveniently located off of an interstate exit.

In terms of self-promotion, you’re not likely to come across many billboards or advertisements for the island’s two outstanding 18-hole layouts. As the centerpieces of the resort, both are member-owned and have a semi-private vibe that runs counter to the “come one, come all” aurora of the state’s larger golf strongholds.

Fripp Island Golf and Beach Resort’s original course is Ocean Point, designed by George Cobb, who spent most of his professional life living in Greenville, S.C. Cobb was close friends with Masters founders Bobby Jones and Clifford Roberts, who tapped him to design the famed par-3 course at Augusta National.

The two courses are separated by a relaxing five-minute car or golf cart ride through the heart of the island and main resort area, which features multiple pools, a food court, poolside bar (The Sandbar) and gift shops.

Upon arrival at either clubhouse, golfers are often pleasantly surprised to discover that both Ocean Point and Ocean Creek feature practice ranges, despite Fripp Island being only 6.5 square miles (Hilton Head Island, by comparison, is 70).

A Tale of Two Courses

According to Char Cormier, director of golf for both courses, experienced players prefer Ocean Creek. Playing to 6,613-yards from the tips, the par 71 plays much longer in the heavy ocean air. And coastal breezes that kick-up in the afternoon can dramatically change the course’s personality in a matter of minutes.

Love is widely known, and praised, for his traditional approach to golf course architecture. This reverence for the game is on full display at Ocean Creek, where tees boxes are squared, landing areas are clearly defined and green complexes are artfully tucked into pockets of palmettos and palm trees.

In addition to its relative length, Ocean Creek’s defense derives from Lowcountry marshes and lagoons that are in play on 11 holes. And golfers take careful note, these aren’t the type of water features to venture close to while searching for errant shots. Fripp Island’s alligators are often sunbathing on the banks or lying quietly in the shallows.

There are so many camera-ready holes on Ocean Creek, but the par-3 6th, with its approach shot over an expanse of coastal grasses and unobstructed views of the coastal plain, is an absolute stunner. The course’s routing is also noteworthy in light of its par 5-4-5 finish on holes 16 through 18, which packs over 1,500 yards into its final triumvirate.

Ocean Point checks in slightly shorter than Ocean Creek from the back tees at 6,556 yards and plays to a par 72 that affords golfers more scoring opportunities. And as Cormier points out, Cobb left the majority of green fronts open so players can bump-and-run approach shots onto the putting surfaces.

While Ocean Creek’s beauty lies in the subtly of its Intracoastal, Lowcountry setting, Ocean Point is all about the wow factor of the Atlantic Ocean, which is in view on 10 holes and nearly in-play on four. Its interior holes are also compelling, taking golfers on a ride through thick strands of live oaks, palmettos and lagoons.

Aside from their settings, the biggest difference between the “Point” and the “Creek” (as locals refer to them) are their greens. Built in 1996, Ocean Creek’s green complexes were constructed to the USGA’s standards of the time and are much larger with several pin locations. Ocean Point opened in 1964 when smaller greens were the norm, and complexes were less ornate.

Traditionalists will appreciate that walking is not only allowed on both courses, it’s encouraged. Pushcarts are available at the bag drops, or feel free to bring your own. Wee tees, placed ahead of the forward tees on Ocean Point and Ocean Creek, setup ideally for juniors and beginners.

Suffice it to say, Fripp Island Beach and Golf Resort’s two 18-hole gems are complementary, yet decidedly different. In recognizing this, the resort offers a wide variety of golf packages for groups of all sizes that feature both Ocean Point and Ocean Creek. And guaranteed replays can be added to select packages for a small fee.

Golf packages include cottages and villas accommodations located either along, or in proximity to, both golf courses. The resort’s vacation rentals are fully-equipped with all the comforts of home, including kitchens, cookware, outdoor grills and washer/dryer. Some units come with golf carts, and for those that don’t, carts are available to rent.

Breakfast and lunch are available at both courses at the Ocean Point Grille and the 19th Hole at Ocean Creek. The Bonito Boathouse, less than a mile from Ocean Creek, offers a beautiful setting for dinner overlooking the island’s inland waterways. Additional dining options open up for the peak summer season, including the Beach Club and Palmera Taqueria. Dining hours and availability are listed at the website.

Fripp Island Beach and Golf Resort is just a half-day’s drive from major metro areas in the Carolinas, Georgia and north Florida. Golfers outside of driving range can choose from two award-winning airports: Savannah-Hilton Head International (SAV) in Savannah, Ga. and Hilton Head Island Airport (HHH), both of which are 1.5 hours away.