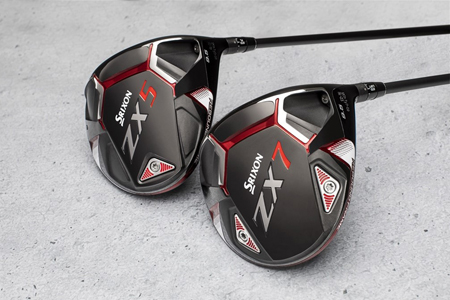 WYNTK:
The ZX5 and ZX7 drivers fill out Srixon’s ZX family following the earlier announcement of the ZX irons.

The game-improvement category ZX5 has a larger footprint and a more rounded crown than the players category ZX7. It is designed to provide a high launch with a more pointed rear shape and shorter skirt compared with the ZX7 that has a rounded rear profile, taller skirt and flatter crown producing a lower launch, lower spin.

Both use a 15% larger carbon fiber crown helping to relocate the center of gravity lower in the clubhead which improves both the resistance to twisting at impact (MOI) and overall forgiveness on off center hits.

The Rebound Frame construction uses areas of flexibility and stiffness Srixon says, “work in tandem to focus more energy into the ball at impact.” As with all drivers the face flexes at impact and the ZX models have a second specific flex area across the crown parallel to the face.

Research and Development Vice President Jeff Brunski was quoted in the announcement, “Rebound Frame represents the best energy transfer system we’ve ever designed into a driver. From the center of the face to the very rear of the club, we’ve tuned the clubhead stiffness to put more energy into the ball than ever before. The entire driver head works in harmony to provide an unprecedented rebound effect, giving you more maximum ball speed for more distance.”

Sole weighting may be customized to suit the user by switching out the single 8-gram weight in the ZX5 and the two sole weights (8 and 4 grams) in the ZX7.

Also announced were ZX fairway woods ($269.99) and ZX hybrids ($229.99) which are made with the Rebound Frame and carbon fiber crown similar to the drivers. Additional details may be found on Srixon’s web site.