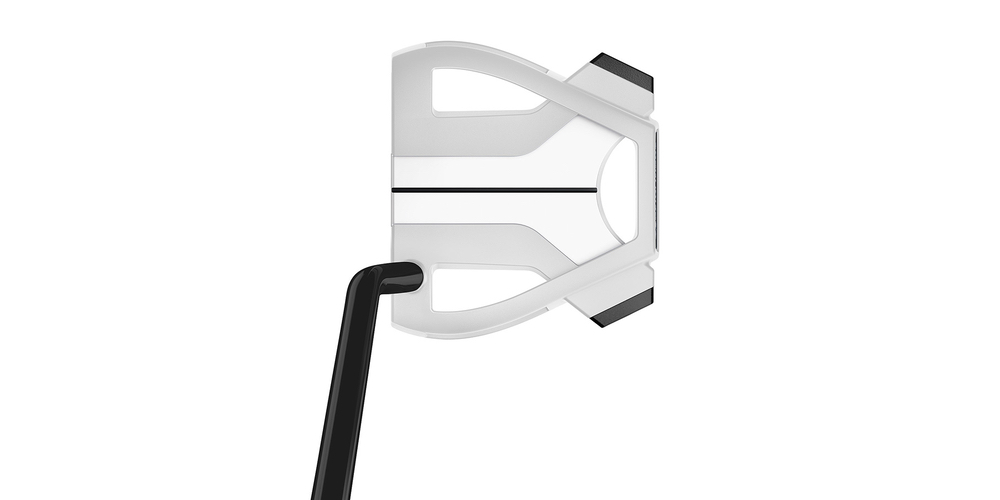 Currently TMAG has one of the most popular putters being used on all Tours – the iconic Spider putter.

This year they have produced a new iteration of the Spider, the Spider S. 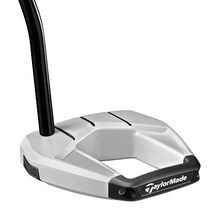 The Spider S is Taylormade’s highest MOI (Moment of Inertia) putter with an MOI of 6,000 and has a deep center of gravity, making the Spider S the most stable putter in Taylormade’s lineup. It is also a “very handsome” putter according to both retail store employees and many of our testing group.

The square-framed Spider S is machine milled 6061 Aluminum, combined with strategically placed tungsten weighting on the sole and back bar to provide unparalleled stability for consistent rolls across the face.

This tungsten weight bar at the rear of the putter is customized for each shaft length to deliver a precise swing weight. The 48g Tungsten sole weights are positioned on the front left and right side for stability. Also available are the model S putter with 55g, 65g and 80g unit back bars, which are designed to influence head weight, feel and performance. The heaviest weight (80g) pairs with the shortest putter length (33 inches) and vice versa.

The 3 sightlines combined with the back bar, make alignment and set up really easy to get the ball rolling. Head weights come in 378g, 357g, and 350g. The Spider S putters are available in both Right Hand and Left Hand models and have a loft of 3° and Lie Angle of 70° and lengths of 33″, 34″ and 35″.

The Spider S uses the Pure Roll inserts to produce better sound and feel, while the 45° grooves increase topspin to help the ball start and stay on its intended line.

The stock shaft is the single bend KBS Black Stepless CT Stability Shaft which is designed to reduce deflection and increase stability. The stock grip is the black SuperStroke GTR 1.0.

The Spider S is available in both right handed and left handed models and features the anodized Chalk colored model (more silver looking) and the Navy colored model.

These putters were designed for those players who desire the stability and forgiveness of a mallet but prefer a more traditional look at address.

The Truss hosel is designed for stability and resists twisting at impact, leaving the putter face squarer for longer.

Their “Truss” USP (Unique Selling Proposition) is derived from the building industry. A truss is a two-contact point triangle shape that is frequently used in support structures such as roofs and bridges. Here the truss is incorporated in the hosel.

According to Chris Trott, Taylormade’s Tour rep,” by creating multiple contact points along with the topline, the Truss hosel design reduces the amount of unsupported mass and deflection at impact. It’s intended to increase the stiffness/frequency for an improved sound and feel.”

When looking at the putter from the side, it gives the illusion of being an awkward and heavy structure, yet in actuality, the Truss hosel is quite inconspicuous when viewed at address.

What we found while testing the Truss line of putters, is that the Truss blends into the topline of both styles, that of a traditional blade-style blade and that of a modified mallet.

The TaylorMade Truss features a new eye-catching, cobalt blue colored, PureRoll face insert which produces both smooth roll and a feedback-enhancing feel. The insert combines 45° grooves with a softer polymer to increase topspin and improve forward roll across varying surfaces – helping your ball start and stay on its intended line.

There are four different models available in the Truss putter range: 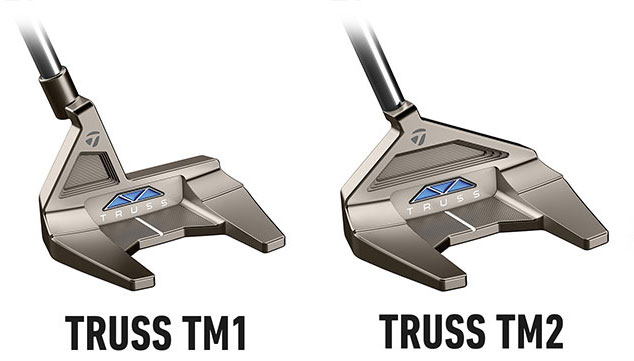 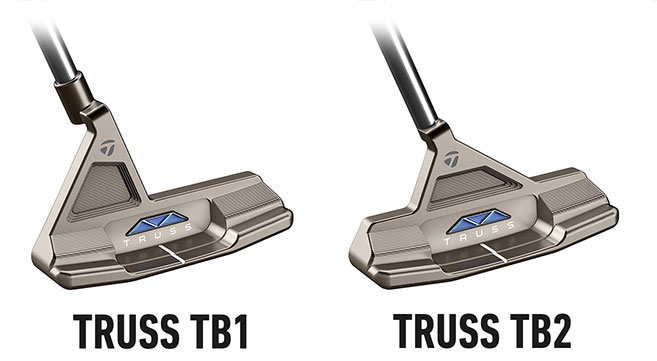 The Truss TB1 which is a heel-shafted blade putter with a heel-mounted Truss hosel and features 16° of toe hang to suit arcing putting strokes. It also has an additional 8g of weight added to the toe in design to counterbalance the Truss hosel.

The Truss TM1is a mallet putter with heel-mounted Truss hosel and features 10° of toe hang to complement strokes that open and shut the putter face.

The Truss TM2 is a face-balanced mallet with a center-shafted Truss hosel and is designed to match straight-back, straight-through putting strokes.

The Truss putters also have adjustable sole weights, allowing golfers to achieve a variety of swing weights and CG placements to match the characteristics of their putting stroke and personal preferences. This option garnered positive reviews from our testing group in that they enjoyed the ability to “customize” their putter.

We had very favorable responses from our testing group. Though it took a little time getting used to the putter, almost all liked the feel, the roll of the ball and the weight of the TM1 model they were using. Hagen Fell, an assistant golf pro at La Jolla Country Club, loved the weight and feel of his M1, especially the roll of the ball.

The shaft is the new KBS chrome C-Taper Tour Stepless stability putter shaft that weighs 120 grams and is designed for less deflection.

The Truss putters are available in both Right Hand and Left Hand models and have a loft of 3° and a Lie Angle of 70°. Lengths are available in 33″, 34″ and 35″, and the grip is the Lamkin Sink Fit Skinny grip. As mentioned previously, the hosel is the Truss heel (TB1, TM1) and the Truss center (TB2, TM2).

Barry Lotz,J.D.,Ph.D.
Barry Lotz, J.D., Ph.D. is the director of the Professional Golf Teachers Association of America. He is a member of the Golf Writers Association of America, the California Golf Writers Association, and serves both as a Consultant and Mediator to the golf industry. He is also the author of numerous books, including “333 Best Web Sites for Golfers”, “How to Build Business Relationships through Golf” which is in the Top Ten Golf Business Book’s bestseller list. His latest book,” The Right Mind for Golf” is now in its 9th printing. He currently works with 14 Tour Players on mental coaching, putting and scoring techniques.