The USGA Just Doesn’t Get It 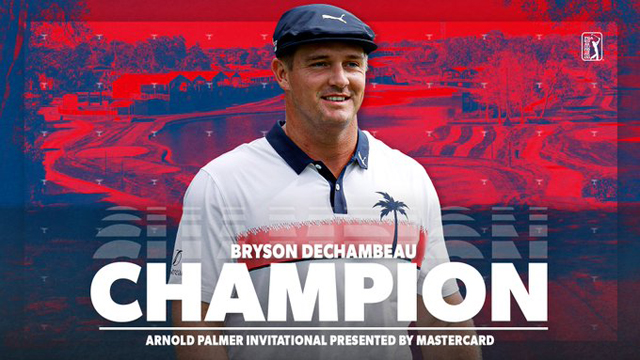 The Arnold Palmer Invitational. Bay Hill Club & Lodge. Bryson DeChambeau. A trifecta if there ever was one and another example of who should and in fact does make a difference our game.

The fans. The amateurs. The weekend warriors. The ones who love golf, love to watch and love to play.

The excitement around Bay Hill’s sixth tee was electric when the California strongman let fly with a 370-yard drive in Saturday’s third round and a 377-yard effort in the final round as he tried to drive his ball onto the green of this par-5.

Par-5? Yep, 555-yards over water that mortals, which is to say the rest of the field, with a really good drive could expect more than 240 yards for their second shot. On Sunday DeChambeau had 88 yards and second place finisher Lee Westwood hit it a credible 305-yarder leaving a solid 255.

The encouragement from the crowd was more like pro wrestling than pro golf. And using a phrase I really dislike but is nonetheless appropriate, that’s what it’s all about.

Both made a birdie four on the hole.

It would seem DeChambeau’s prodigious distance with his Cobra driver and irons was the big story just as it was after his victory at the U.S. Open last September. But the “Ball-Goes-Too-Far” crowd looks at this display of athleticism as bad citing all the tried and tired arguments while ignoring the most important fact.

Golf fans, the amateurs you see every day on your local course, are the soul of golf. The BGTFers represented by the United States Golf Association with their seemingly inflexible opinion don’t seem to get it.

If they succeed in reducing the potential distance skilled professionals can hit the ball golf fans will be hurt, the game will be hurt, and interest will decline. BGTFers do not seem to understand golf is entertainment and in competition with dozens of other activities. The excitement of DeChambeau and other superb athletes knocking a tee shot almost literally out of sight is the heart of the fan experience.

After a disappointing experience with a retail store people vote with their feet never to return and often express their frustration on social media. The same could occur if the Rules of Golf a changed to penalize the elite player-athletes and their equipment.

A prediction: Should the BGTFers and the United States Golf Association succeed in their quest to roll back the ball by setting some restrictive standard expressing their yearning to return to the mythical past golf fans will lose interest, TV ratings will drop as will tournament attendance plus sponsor advertising and charitable donations will be negatively impacted.

The USGA just doesn’t get it.