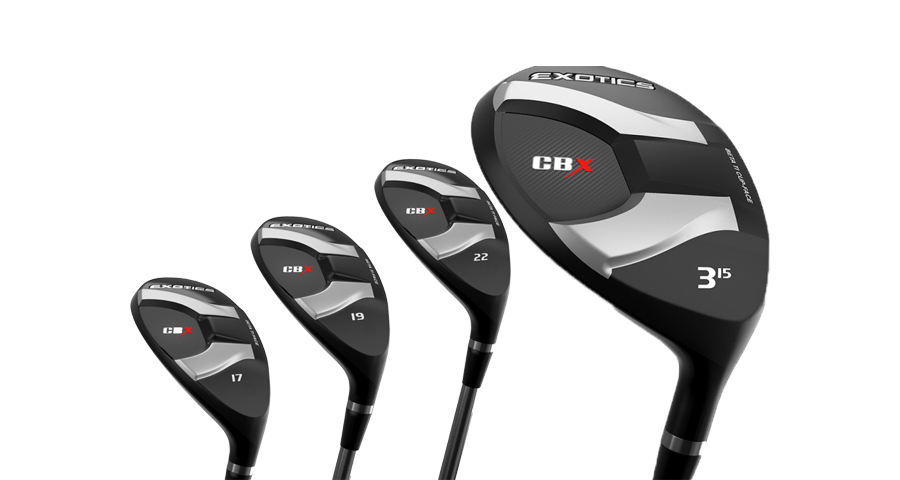 Modifications were made to the Exotics CBX fairway metals and hybrids based off of feedback from Tour Edge’s Tour Staff on the PGA Tour Champions and some of the other 50 plus professionals who put Exotics into play on tour in 2018.

“We spent every week out on the professional tours this year servicing the players with Exotics clubs,” said Tour Edge President and Master Club Designer David Glod. “Obviously we learned a lot on how we could improve the CBX metalwoods by working so closely with the legends of the game.”

With the new Exotics CBX 119 fairway metal, Glod and his R&D team combined the shapes of the original CBX with the more compact, deeper-face CBX T3 model to create the ultimate fairway metal shape.

“Even if a change was slight, in terms of say a couple millimeters, we took it into account,” said Glod. “The end result is that we made even better versions of the best metalwoods on the market and the majority of the changes made were based on direct Tour player feedback.What better person is there to talk to about how to improve a golf club than a group of tour players who had already put CBX into play and that represent over 200 PGA TOUR victories in their combined careers?”

With a goal of further reducing spin off of the metalwoods already known as “The Spin Killers”, the Speed Ramp Sole was widened by 15% to create higher MOI and an even higher CG. The higher CG helped to reduce spin even more than in the previous iteration and created more wind-defying distance out of what had already tested as the longest fairway metal on the market.

The wider and deeper Speed Ramp Sole design surrounds a larger carbon fiber section on the sole of the new CBX 119 design, allowing for more weight to be positioned in the preferred location closer to the face of the clubhead. The stainless steel Speed Ramp Sole design also improves turf interaction, allowing golfers to hit the fairway metals out of the rough or deep divots.
The ramp on the Speed Ramp Sole extracts the ball from the turf while the chrome stainless steel wings  in a “horseshoe” shape  expands the sweet spot on the face and surrounds and protects the ultra-light carbon fiber cap.

Glod estimated that he was able to save another 10% of the weight of the clubhead due to the increased carbon fiber area, leading to 50 grams of weight out of the 215 gram total head weight being placed up and forward in the clubhead to reduce spin.

By combo brazing a Titanium face plate to a stainless steel body combined with carbon fiber on the sole, Glod and team saved 25% of the weight of the clubhead to use towards CG manipulation.

“Reducing spin is the number one key to adding distance to a lofted club like a fairway or a hybrid,” said Glod. “If we will lower the spin significantly, we will win the distance battle. This is not as easy as it sounds. It’s tough to lower spin in combination with loft. We knew we had to concentrate on CG manipulation and the only way to do this was to make the only fairway wood and hybrid ever made with Titanium face, combo brazed on to stainless steel and with carbon fiber on the sole have even lower spin rates than what we had accomplished before.”

The independent test results from a recent Golf Laboratories robot swing analysis confirm that Glod and team have again succeeded in reducing spin and providing greater distance than any other fairway metals available on the market.

The CBX 119 ranked 1st in total distance,1st in carry distance and #1 in lowest spin rates against four of the top selling fairway metals on the market. The CBX 119 3-wood averaged 13 yards more total distance and 10 yards more carry distance over Taylor Made M3, Callaway Rouge, PING G400 and Cobra F8. It also bested the four clubs with 358 RPM less spin than the four clubs tested against on average at a 110 MPH swing speed. The new Exotics CBX hybrid integrates new technology designed to push the boundaries of low-spin distance combined with tour-inspired feel and workability. The new CBX 119 Hybrid- shorter heel to toe for more workability and lower spin results, and less face progression.

The modified design is also a taller face that produces more power and less spin. The larger Beta-Titanium face makes for more face flex, or CT, making the hybrid hotter off the face than its previous iteration.

“Again with the hybrid, we molded the old design with tour player feedback to come up the new 119 version,” said Glod. “With the new CBX 119, the changes to the hybrid are a little more visible than the fairway. The club seems more compact at address and with a blunter toe; even though it is the same exact CC’s as the original. These extra CC’s went to the face height. The 119 will also have more pop off the face due to the beta-Titanium face.”

Both the CBX 119 are keeping the same basic  look cosmetically,  but Glod admits to adding Red, White and Blue in the  new CBX119 logo due to the pride he takes that the Exotics clubs are 100% built in the Unites States out of Tour Edge’s Batavia, Illinois headquarters.

Share
Facebook
Twitter
Linkedin
Email
Previous articleBest of Show – A Few of the Items Attracting Our Attention at the PGA Merchandise Show
Next article“Culture Eats Strategy for Breakfast.”