PROS
DISTANCE: Best for players who favor tempo over muscle off the tee; a few slower swingers gain 10 yards over their own driver; off-center hits don’t result in a significant loss of distance.
ACCURACY/FORGIVENESS: Club makes it easy for most guys to find the left side of the course, minimizing slice action; keeps off-center strikes in play.
FEEL: Head remains fairly stable through impact; overall lightness doesn’t take a toll on the arms, even late in the round.
PLAYABILITY: Consistent right-to-left flight with average to higher-thanaverage trajectory.
LOOK: No glitz or glam—all-black crown and clubface.

CONS
Some testers have a tendency to get off-plane or to overswing with such a light club; dissenters say impact feel and sound lack pop; big slices aren’t eliminated from everyone’s arsenal.

From Golf Magazine (November, 2011)
With its 270-gram Superlight driver, Wilson is the latest manufacturer to join the weight loss craze. The club is designed to help you swing faster and generate greater ball speeds. To start, specific areas of the crown and face have been made thinner to save weight. The lighter 46-inch driver incorporates a WinnLite grip (saves 26 grams) and 48-gram Matrix Ozik Xcon 4.1 shaft. The club’s “5-zone” face technology (thinner toward the heel and toe) helps to improve ball speed and expand the effective hitting area across the clubface.

Pros:This driver is very long, very forgiving, and extremely well balanced.
Cons:The sole graphics and the shield on the face are a little over the top.
The Bottom Line:Wilson finally brings a driver to market that can not only run with the pack, but whoop the tar out of most of the competition.

Well the day many golfers have been talking about has finally come. Not just a new driver from Wilson Staff, but a driver that actually takes the competition head on, and proceeds to stomp many of them into the ground. It’s a well known fact that I am a fan of Wilson Staff equipment. I have played their irons for the past 4 years and came within a hairs breadth of bagging their woods as well. The Wilson Staff Smooth was a great driver, but suffered the same fate as The TX Four Golf Ball they had in production. Basically, it was all slicked out, sported the highest tech, etc.., but gave up a couple of yards here and there as compared to some of the others on the market. We all know that Joe Lunch Box, Weekend Warrior, doesn’t care about anything but the longest, so both the TX Four Ball and Smooth Driver died on the vine.

The next edition—The DXi Driver and new FG Tour Ball, were just as good as most of the competition. In fact, The DXi gave up only a couple of yards here and there, and that was to the clubs  sporting ultra light weight, or ultra long shafts. That’s when the lightbulb finally came on for the boys at Wilson Staff. If you read any of the golf boards out there, you know that Wilson Staff Irons have a huge following– many thousands larger than just yours truly, and that their new FG Tour Ball has built its own little cult of personality. But board after board bemoaned the fact that Wilson Staff Woods were just a tad behind the competition. This new version of the already great DXi driver spares nothing as far as getting them into the race, and well past the middle of the pack. It is the first driver out of the gate to Challenge my Adams F11 Driver, which is a mighty powerful club.  Here’s why I think Wilson Staff has finally made the break through.

Specs and Techs-5 Stars
Rarely do I ever start a review with this category, but it is this category that actually makes it possible for this club to garner 5 star ratings in both Distance and Balance. That’s quite an accomplishment when you realize how persnickety I have gotten as  my swing goes through an overhaul that has raised my awareness to the level that allows me to subconsciously monitor my entire swing while I shore up my backswing and lengthen my follow through. So what is all this techno-gizmo-happy-changey stuff?

The ultra light driver is not a new concept. Cleveland actually beat everyone else to the punch. But at 269 grams, a full 50+ grams lighter than the average off the rack model, this baby comes to market with components that are not only lighter, but recognized for their build quality and proven distance potential. The 46” length is –despite my druthers, fast becoming the norm. The 48 Gram shaft is not some hopeful Newbie, but the well recognized Matrix 4.1.Xcon Shaft  Amazingly, this feather-weight driver manages to come in at a solid D2 Swing Weight.

Distance –5 Stars
This driver is as long as anything else out there. It’s as simple as that. Now admittedly, most drivers have already maxed out the COR ratings, Allowable Head Size, and Maximum MOI—but oft times “Too much of a good thing” can land far from The Optimal Good Thing.

The head on this driver is 450CC’s—generous, but well under the maximum. The length is 46”. A tad long, but nowhere near the 48” maximum.  The MOI, however, is the best on the market. While many drivers sport the maximum MOI allowable under USGA Regulations, they don’t take advantage of aerodynamic shapes, (remember the block headed drivers), or the hottest face technologies, or use top notch shafts.
This is not a Wilson Staff Commercial, but simply an observation based on personal experience. On average, this driver gained 5 yards as compared to my Adams. but that comes more from Forgiveness, weight, and shaft technology, than anything else. The 5 stars is a real rating, not a typical corporate, “4-7 yards longer than last years model”, or the ubiquitous “I just bought this driver and gained 20 yards, and hit 14 of 14 fairways” (ain’t I smart self aggrandizing consumer version) either. Simply try this one, and you’ll see what I mean.

Forgiveness—5 Stars
It’s really simple here. The MOI on this driver is without question, off the charts. I am certain that there are other drivers that sport the full 5200 USGA allowable MOI ratings, but they probably didn’t balance the shaft as well as Wilson Staff did when they mated The Matrix Ozik  XCON 4.1 to this head.
Similar to The Corporate Claims of “Cup Face Technology” (Which is an already well recognized technology that actually backdates to the now defunct MacGregor Golf’s NVG Driver of several years ago), or The Variable Face Thickness ( Is there a golf club maker anywhere that doesn’t claim this as a proprietary technology?) hefty MOI ratings are nothing new. What is new is that the MOI numbers, as well as club performance in side by side testing against the competition, are born out under independent testing besides mine and Wilson’s.
You will probably end up reading about this in some of the popular Golf Magazines before The Spring Rush to jump start the season begins. This driver forgives toe hits almost as well as their latest irons do. That’s really quite an accomplishment.

Loft Options and Shaft-4 Stars
I would love to see Wilson Staff take their numbers seriously enough to offer a tour version that comes in with an 8* loft. After all, there are 2 High Loft versions. There is both a 12* and 14* High Loft Version, so they are definitely reaching out to the high cappers of The World. Still 9* and 10.5* versions are more than a nice start. Sadly, Lefties only get a choice of the 10.5* version, thus the loss of a star here.
I’d like to give this shaft a full bore 5 stars, because it certainly worked that way for me. Trouble is, it was ever so slightly torquey for other testers. Still, it is a great shaft that will fit 95% of all golfers. Here’s the Specs.

Lite Flex is 48 Grams in weight with a torque rating of 5.5 and a low kick point
Regular Flex is also 48 Grams with a slightly lower torque rating of 5.4 and a low-mid kick point
The Stiff is an ever so slightly beefier 50 Grams with a 5.3 Torque Rating and a Mid-Kick Point.
Basically, my 98 MPH Driver Swing was definitely best fitted to the Stiff Flex. I would recommend going up a flex for anyone who has a more quick tempoed swing.

Balance– 5 Stars
This was the big surprise for me. I’ve tried a lot of the “Ultra-Light Drivers” in the past, and I’ve also experimented with custom versions when ultra light shafts first hit the market place. This is the first time I’ve tried one where the club head awareness wasn’t a guessing game at any single point in my swing. Many have come close; many have also proven to be vague beyond belief at critical points during the swing. This one lets you know where you are at all times. Due to the D2 Swing Weight, it’s never a guessing game, nor is there ever any danger of the club head telegraphing its position to you during the midst of a finesse drive. This baby is the real deal.

Overall—4 ¾ Stars
There is no doubt in my mind that this is the best driver that Wilson Staff has brought to market since the old Dd6 model. I used to pound that club quite a ways, and it was always straight with a nice baby draw on it. This club actually felt similar to that one, only quicker on the uptake. It must be the weight distribution. Yes there are a lot of Light and Ultra-Light Drivers out there, but so few of them are this forgiving or this well balanced. I really liked the DXi—but I absolutely love The DXi Super Light. It is the only club that has given my F11 a true run for her money, and it is the only club that ever reminded me of my long lost beloved Dd6.
The lightest driver that Wilson Golf has ever engineered, the DXi Superlight boasts at an extremely light 269 grams.  Nearly 50 grams in weight reduction as compared to most traditional drivers!  What does that mean for you?  Simply this:  Light weight means a lower swing effort, resulting in greater club head speed, which delivers explosive power through impact, launching the golf ball further than you could ever imagine.

In addition to a 26g WinnLite Firm grip, a Matrix Ozik 48g super light shaft, the new DXi Superlight head has selectively thinned non-structural areas of the crown and sole, reducing weight by nearly 6 grams.
2. Low Club MOI
– Club MOI is the dynamic measurement of the effort it takes to swing a club.  The two factors that play a role in club MOI are the weight of the club itself and how far that weight is positioned from the hands.  At 46 inches in length and a swing weight of D2, the DXi Superlight has the lowest measured club MOI on the market.
2. Five-Zone Modified Cup-Face Design
– DXi Superlight utilizes cup-face technology to expand the sweet spot of the face.  Wilson’s proprietary variable face thickness fine tunes and maximizes the sweet spot into the heel and toe, increasing the high CT area of the club head for optimal accuracy.
Wilson Staff DXi Superlight Driver
At only 269 grams, nearly 50 grams lighter than traditional drivers, the new DXi Superlight driver has been designed to help golfers with slower swings generate more power off the tee.
Fitted with the WinnLite Firm Grip (just 26g) and a Matrix Ozik super light shaft, the DXi Superlight has also been thinned to reduce the weight to a maximum. This offers a very low MOI, on of the lowest in the market in fact.
As well as weight, Wilson have also used the cup-face technology to expand the sweet spot of the face. With a variable thickness face, the sweet spot is extended into the heal and tow giving great forgiveness and increased accuracy. 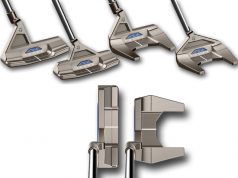 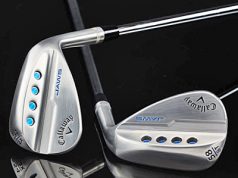 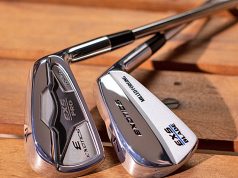 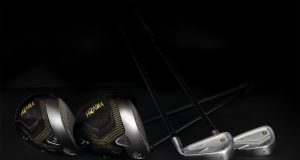