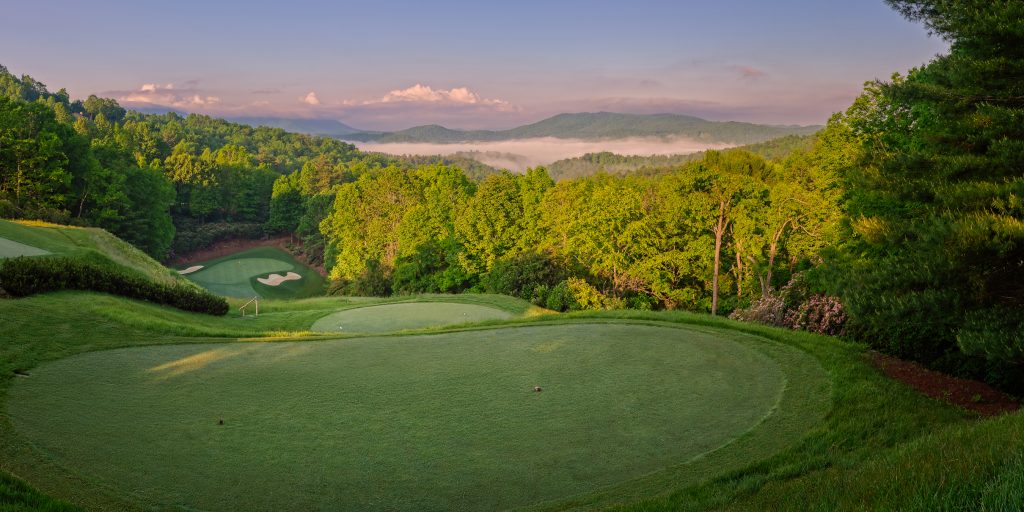 In wine vintage terms, 2021 will be looked back upon as a “great year” for golf in the Carolinas.

South Carolina is once again in the national golf spotlight this week as the PGA TOUR rolls into the Congaree Golf Club in Ridgeland for the inaugural Palmetto Championship. It marks the TOUR’s third Palmetto State stop in a three-month span. In August, the pros head back to the land of sweet tea and BBQ for the long-running Wyndham Championship in Greensboro, N.C.

A great year. But truth be told, it’s been this way for decades.

With nearly 1,000 golf courses between the two states, 220 days of sunshine and diverse geography ranging from the Lowcountry beaches to the Blue Ridge Mountains, the Carolinas have long been one of the nation’s golf tourism strongholds. The overall economic impact of the game is estimated at $2.6 billion in South Carolina and $4.8 billion in North Carolina.

Over the past year, however, thousands of golfers have decided that visiting just isn’t enough, opting to relocate to the one of two states’ robust crop of golf communities. And according to the latest projections, more are on the way.

For those considering a move to either state (cue James Taylor), here’s a breakdown of what to expect by region.

Vibe: Take the sugar sand beaches, palm trees and fresh seafood of Florida and put it in a blender with the live oaks, Spanish Moss and gentility of the Deep South, and you’ll get the flavor of the South Carolina Lowcountry spanning Hilton Head north to Pawleys Island. The southern coast of North Carolina is a collection of barrier islands with a summer-season party atmosphere, while the northern coast is mostly the Outer Banks, a region with an unabashed Cape Cod feel.

Pros: There’s an allure to the Lowcountry, where pirates once roamed and pristine beaches on coastal islands like Fripp and Daufuskie harken back to a bygone era of remote coastline. And then there’s the food, the hospitality and the year-round golf climate. In terms of sheer coastal scenery and ambiance, and pure family fun, the Outer Banks has few rivals.

Cons: Without exception, the biggest bogey is hurricane season. With the number of named storms seemingly on the rise each year, it’s likely that the Carolina coast will see one if not two devastating storms each season. The heat and humidity in the summer can be oppressive, but that’s the case in much of the Southeast.

Golf: Home to Hilton Head “Golf Island,” Kiawah Island Golf and Beach Resort, the 90-plus courses of Myrtle Beach and the 30-plus layouts of North Carolina’s Brunswick Islands, the region encompasses many of the East Coast’s premier golf destinations. Big-name venues include Harbour Town Golf Links at The Sea Pines Resort, the Ocean Course at Kiawah, TPC Myrtle Beach and the Dunes Golf and Beach Club.

Live: No region epitomizes the Lowcountry like the Hilton Head Island / Bluffton area, and no resort community represents Hilton Head quite like Sea Pines. The 5,000-acre masterplanned panacea dates back to 1950s and visionary developer Charles Fraser. While its been mostly built-out for decades, there are almost always ample resale homes on the market, many of which have been recently renovated and upgraded.

Sea Pines Country Club is the lone private club inside the resort community’s gates. The golf course was originally designed by Arnold Palmer and was updated by Clyde Johnston in 2001. Considered one of the most playable and well-conditioned layouts on the island, it’s undergoing a major practice facility expansion, golf shop renovation and re-grassing of tees, fairways and greens.

Of note, the general manager is Robbie Ames, brother of PGA and Champions TOUR player Stephen Ames. The club is also known for its resort-caliber outdoor pool and deck overlooking a vast expansive of Lowcountry tidal marsh, as well as a fitness and wellness center that ranks among the top 50 in the U.S. There are periodically homes for sale right along the golf course for those seeking the ultimate in convenience.

Vibe: The Carolinas’ central regions are home to some of its largest population centers: Charlotte, the Triad and the Triangle in North Carolina, and Columbia in South Carolina. The North Carolina Piedmont is chock-full of rolling hills, massive oak trees and many of the states’ best BBQ joints. The South Carolina Midlands are flat and sandy with mile after mile of towering pines. The Midlands and Piedmont converge in the North Carolina Sandhills, the “Home of Golf” and home to famed Pinehurst Resort.

Pros: Either region offers “easy living,” with the overall cost of living being lower than in coastal and mountain area. The climate is a bit more predictable, with moderate winters and warm summers that extend well into September. Did we mention the Sandhills and Pinehurst Resort? Having the 30-plus courses of Moore County, N.C. and the home to five future U.S. Opens at the resort’s famed No. 2 course is a huge, huge “pro.”

Cons: If there’s any knock on this expanse of the Carolinas, it’s that it lacks a true geographical calling card. Golf courses generally lack the “wow factor” of their down-state or up-state siblings, and in the winter months, most feature dormant brown Bermuda grass that northerners often mistake as dead or dried out.  Columbia’s old tagine is “famously hot,” and the summer months there can feel like living in a salamander oven.

Golf: The Sandhills are by far and away the leading golf destination, what with Pinehurst Resort, Mid Pines and Pine Needles, Talamore, Dormie Club and other world-class venues. Charlotte, Greensboro, Winston-Salem and Raleigh-Durham-Chapel Hill are home to numerous golf communities and affordable daily fee courses.

Live: The Village of Pinehurst is America’s original golf community. Founded in 1895 by Boston business magnate James Walker Tufts and designed by Frederick Law Olmsted, “The Village” encompasses Pinehurst Resort and its nine 18-hole layouts. Pinehurst Country Club is the private side of the operation, offering its members exclusive access to courses on select days.

Golfers pay a premium to live in the historic homes in the original Village footprint, with prices starting around $750,000 and going up to $2 and even $3 million. Just outside of The Village core but still within walking, biking or golf cart distance from the club, homes in the $450,000 to $750,000 range. Many are situated along courses No. 1, 3, and 5. Living along neighboring Pinehurst Lake is also an option for those who enjoy water sports.

Vibe: An amalgamation of craft beer, Subarus, and world-class golf, the Foothills and Mountains are home to Greenville, Hendersonville, Asheville, Waynesville and several other quaint towns and small cities. The majority of mountainous terrain lies within western North Carolina, home to an awe-inspiring stretch of the Blue Ridge Mountains with peaks reaching over 6,000 feet. South Carolina owns a small slice of this paradise, known as the Upstate, just north of Greenville and extending west to Georgia.

Pros: Where to begin … postcard-ready scenery, nationally ranked cities like Asheville, Greenville and Hendersonville, and a four-season climate with stunning fall foliage, the occasional dusting of snow and relatively mild summers. For craft brew lovers, the Asheville to Greenville stretch is manna from heaven with Sierra Nevada, New Belgium and Oskar Blues all having East Coast breweries along the I-26 corridor.

Cons: Above 3,000 feet winters can get a bit chilly for those who were expecting a “Sun Belt” climate. Many golf courses in higher elevations in Western North Carolina close for a couple months and reopen in March or April.

Golf: Western North Carolina is ground zero for Tom Fazio’s most heralded mountain golf designs. Champion Hills, Diamond Creek, Mountaintop and Wade Hampton are all within an approximate two-hour drive of each other. Upstate South Carolina is home to six of the seven Cliffs Communities, each boasting championship layouts from premier architects.

Live: Champion Hills, a private community with a nationally-ranked Fazio-designed golf course, is situated just minutes from Hendersonville and less than an hour from Asheville and Greenville. It boasts a broad array of residential options – resale homes, low maintenance cottages and lock-and-leave villas – suiting a wide variety of buyers. Building lots are also available for those who prefer to design their dream home.

Champion Hills offers full-equity and 12-month trial memberships. Both include full access to golf, dining, the wellness center, pool, spa and tennis courts. Most residents are either golf or social members. Full golf members have access to Troon Privé, which grants them entry to 600 of the nation’s top private and resort and daily fee courses in the Troon network. Diehard golfers also take note: Champion Hills is a year-round golf community, not always the norm in these parts.

Live II: Rumbling Bald is a sprawling 3,000-acre golf retreat and community on the northern end of 720-acre Lake Lure in western North Carolina. For decades there was a “resort” on the end of the name, but this Blue Ridge mountain retreat recently rebranded as simply “Rumbling Bald” to emphasize its “visit here, live here” approach moving forward.

Residential offerings include single family homes and condos on and off the golf courses. Rumbling Bald’s lot inventory is ample compared to neighboring communities, with land offerings in the 0.8 to one-acre range, priced from $5,000 to $79,000. Several lots have golf course views; others offer lake views and direct even lake access.