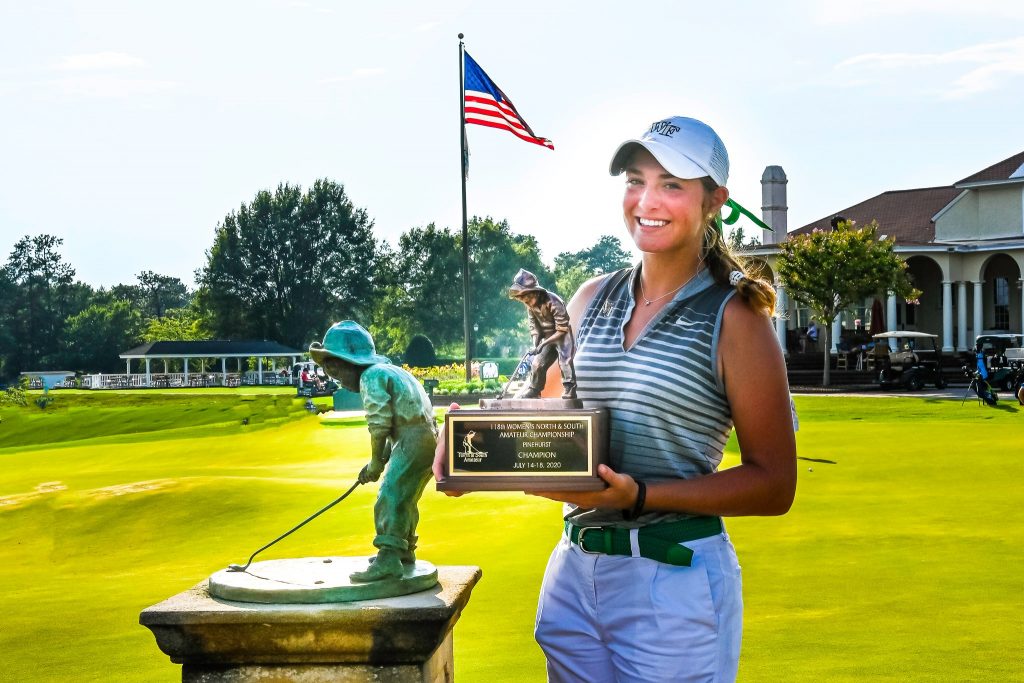 PINEHURST, N.C. – The number of collegiate-branded golf bags at the annual North & South Men’s and Women’s Championships at Pinehurst Resort was staggering.

Hundreds of team logos, nicknames and colors were reflected against the omnipresent sunlight of the North Carolina Sandhills, all awaiting a loop around these storied links with their players and caddies.

The banter between entrants was casual and friendly. This is, after all, a generation that’s more likely to share an image on Instagram or message on Snapchat than smack talk an opponent.

This socially distanced gathering of the best young players in the world was also a refreshing reminder that amateur golf goes on, even with the spring sports season cut tragically short by the Covid-19 crisis.

“I think we all needed this, and you could tell how happy the players and their families were to be back out on the golf course competing again,” said Pinehurst Resort Director of Golf Ben Bridgers. “Amateur golf is such a pure form of the game, and the North & South embodies the very best of it.”

Even the ongoing pandemic couldn’t quell the compelling storylines from the 120th and 118th playing these storied events. The 120-player fields were the strongest in the history of both championships, with nearly 100 more applicants to the field from the prior year across the men’s and women’s divisions.

The men’s field included 32 players inside the top 100 World Amateur Golf Rankings (nearly double 2019), and the women’s included 17 (up three from last year).

The playing venues could not have been purer: Pinehurst’s No. 2 and No. 4 courses, co-hosts of the 2018 U.S. Amateur and widely considered among the best one-two-punches in all of golf.

Between the soaring summer temps, historically competitive field and unapologetically challenging golf courses, the men’s and women’s champions earned their Putter Boy trophies the hard way. Without a doubt, both have their eyes set on the 2024 U.S. Open at Pinehurst.

And speaking of the winners, the storylines get even richer when their names come up.

Tyler Strafaci’s victory made for the first grandson-grandfather pairing to ever win the Men’s North & South. The Georgia Tech standout’s grandfather Frank won twice, in 1938 and 1939.

With five birdies on a sweltering Fourth of July on venerated No. 2, Strafaci etched his name into Pinehurst lore alongside that of his grandfather, defeating crowd favorite William Holcomb V 3 and 1.

The Women’s Championship was also a family affair. Wake Forest’s Rachel Kuehn defeated USC’s Allisen Corpuz in the first hole of a playoff, 25 years after her mother Brenda, an All-American at Wake Forest, finished just short of the championship in the 1995 event.

“I joke with my mom because she finished (well here), and has been holding that over my head,” said Kuehn following her hard-fought victory. “I’m glad I could top her a little bit, but to add my name to the list of winners here is an unbelievable feeling.”

In addition to Strafaci and Kuehn, there was another clear winner: the timeless game of golf played in its purist form. While the college golf season was truncated, and numerous summer tournaments were cancelled, the North & South found a way – and a safe one at that – to carry on just as it has since the early 1900s.

The “first part” of the North & South season is done, with the juniors also completing their tournament on July 8th. The Senior Men’s and Women’s Championships are next up Aug. 16-19, capping a busy amateur season at the Cradle of American Golf that also included the U.S. Kids Golf World Championships in late July.

“If you’d told me two months ago that we’d be able to host six prestigious amateur championships in the course of six weeks during the middle of summer, I might have looked at you funny,” Bridgers said. “Our Pinehurst Resort team and our numerous amateur and junior golf partners have done an amazing job at creating a safe, secure and enjoyable environment for everyone involved.”