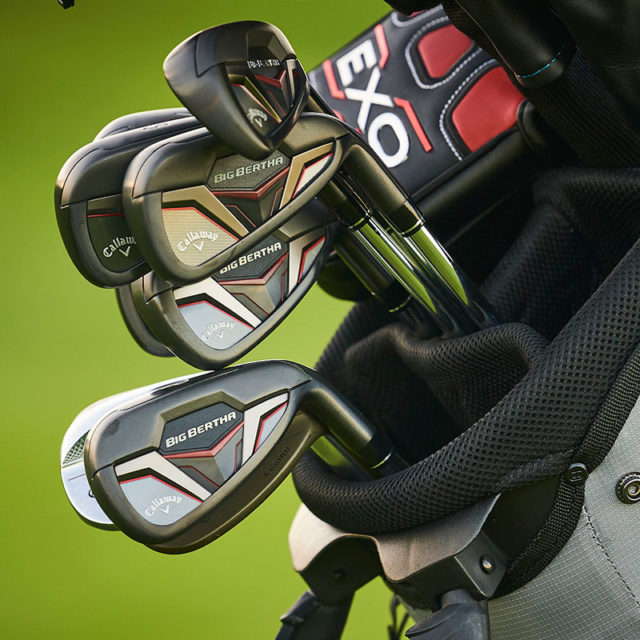 Since Callaway Golf came out with the first Big Bertha irons back in the mid-90s the name has been resurrected several times including in 2014 with irons having the very well thought of 360 Face Cup construction. These Big Berthas helped push Callaway into the top spot in iron sales and made Big Bertha the bestselling iron model.

The 360 Face Cup provides flex to the face at impact and helps energy transfer to the ball so there is more ball speed and distance.

For next season the Big Bertha name is back on their newest super game-improvement irons and hybrids. Big Bertha irons have the 360 Face Cup and several new features whose goal was to make an easy to hit iron with lots of distance potential and the sound and feel golfers like. The Big Bertha face is thinner, so the rebound effect or COR is higher particularly in the center and low on the face since golfers benefiting the most from super game-improvement irons tend to hit the ball thin much of the time.

This led to designing what is being called a “Suspended Energy Core,” club-speak for a structure inside the clubhead that performs a couple of functions including moving weight lower in the head to produce a higher launch.

The Suspended Energy Core consists of a tungsten w 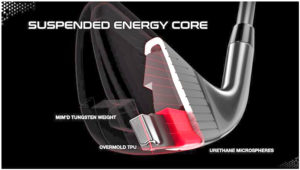 eight that is different for each iron loft iron. The type of tungsten Callaway uses is very dense, about 2 ½ times that of steel, and cannot be welded to steel versus the tungsten used by most manufacturers which is only 50% denser. Because of the type of tungsten, the weight is wrapped in a TPU (thermoplastic polyurethane) sleeve before inserting it in the iron’s cavity. Then a liquid containing lightweight urethane microspheres is injected into the hollow part of the head and it holds everything in place after it hardens. The microspheres allow for compression when the clubface deflects meeting the ball as well as acting as a vibration dampener to improve feel.

All this gives a precise placement for the weighting so launch is at the proper angle still allowing face deflection for distance and control.

The heads of the Big Bertha 19 are more traditional looking than the previous Big Bertha OS irons, but the sole is still fairly wide, and the shafts have a strong offset. Lofts are slightly stronger as well with the Big Bertha 19 having a 43° pitching wedge, a degree stronger compared to the OS. The finish is smoked PVD and they offer a choice of stock shafts: Recoil ESX, Recoil ZT9, and KBS Max 90.

Callaway is also the number one hybrid on the market and for next season the Big Bertha hybrids give higher handicap players both a steel Hyper Speed Face Cup, an adjustable hosel and for the first time Jailbreak Technology. 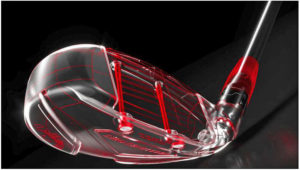 Jailbreak is Callaway’s unique system of rods behind the face running from crown to sole used originally in the Epic 2017 driver and now the top selling Rogue 2018 driver. The rods have the effect of stiffening the crown meaning it doesn’t deform as much at impact. Energy otherwise lost in this change of crown shape can go into the ball to produce more yardage.

As with all golf clubs weight distribution is a key when dialing in the potential distance and control so the Big Bertha hybrids adjustable hosel is shorter and weighs 12 grams less. The saved grams were moved lower into the clubhead to help give an easy launch with lots of carry.

Along with the clubheads having a high resistance to twisting or MOI two higher lofts have been added, a 7-h 30° and 8-h 33° expanding the possibilities for mixed set make ups to match the needs of most any players.

The new Big Bertha hybrids carry a list price of $269.99 each with either Recoil ESX or ZT9 shafts and go on sale the same date as the Big Bertha irons Jan. 18. 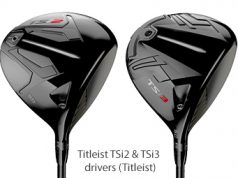 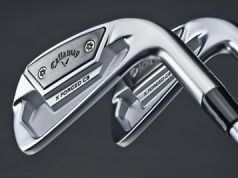