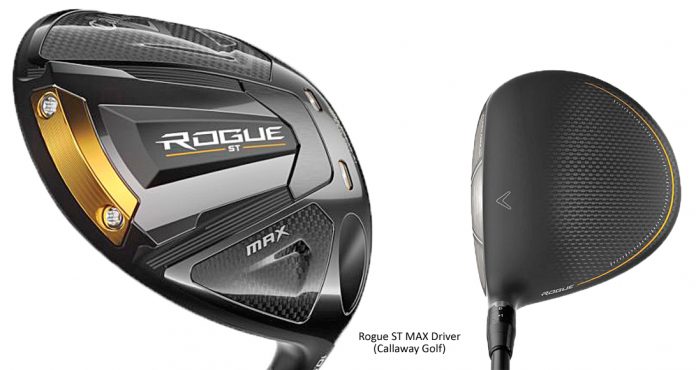 Callaway’s Rogue ST MAX drivers make use of a fixed tungsten weight, a first for them in drivers, plus there are changes to the A.I. face and modifications to the internal Jailbreak titanium rods to achieve higher ball speed, lower spin with added forgiveness.

WYNTK
It never ceases to amaze me how much knowledge of physics coupled with an intimate understanding of materials and intensive computer modeling go into the modern golf club. Callaway, the world’s largest club company is putting their top-of-the-heap status on display with the Rogue ST MAX family that includes drivers, fairway woods, hybrids, and irons.

As with all members of the family the distinctions between the four Rogue ST MAX drivers relate to the category of player their design is targeted but all four share several characteristics. Callaway says their goal regardless of the model was to enhance and preserve ball speed (more distance) plus provide more control (straighter drives) while improving the club’s forgiveness (easier to hit).

Gone is the sliding sole weight of the 2021 Epic model and for the first time a Callaway driver makes use of a stationary tungsten weight located along the skirt. In the case of the new Rogues the machined tungsten, which is urethane-covered, fits into an aluminum assembly with screws to hold everything in place at the head’s perimeter. This extra rear weight fits in a “tail” extension from the sole and the company says this gives a large Improvement to MOI reducing the loss in ball speed when impact is not in the center of the face.

Horizontal stability and tortional direction are provided by a refined Jailbreak Speed Frame in the interior with more mass concentrated towards the bottom of the frame near the sole. Callaway makes the point this gives more stiffening of the head with lower weight in the frame. The new A.I.-designed face is a different than last year’s Epic Max and has a shape that helps to lower ball spin for better flight characteristics while providing additional forgiveness on mishits.

Also new in the Rogue is the Unibody construction with the head’s titanium structure formed as much as possible in one piece compared to the more usual method of welding metal head components together. The crown and two areas of the sole remain carbon fiber as they were in the Epic but the head shape of the MAX is stretched so the center of gravity is more to the rear thanks to the low tail section of the skirt containing the tungsten weight assembly.

The Rogue ST MAX game-improvement model is the one most will choose, and it has the highest MOI of the family with a slight draw bias while the MAX D is a super game-improvement driver with lots of right to left bias and a closed face. The MAX LS targets those better players wanting a low spin driver and has a neutral CG while the smaller head (450cc) of the Triple Diamond LS meant for professionals and low handicap amateurs is biased for a straight to fade ball flight.

The Rogues ST MAX fairway woods have a new Jailbreak design, the ST, which includes thickening the body in a vertical direction and moving the stiffening towards the perimeter rather than behind the face as in the driver. A 28-gram tungsten weight is placed in the sole to move the CG low and forward with a face cup that was A.I. optimized. Three models are offered: the MAX, MAX D and MAX LS. Each carries a price of $349.99.