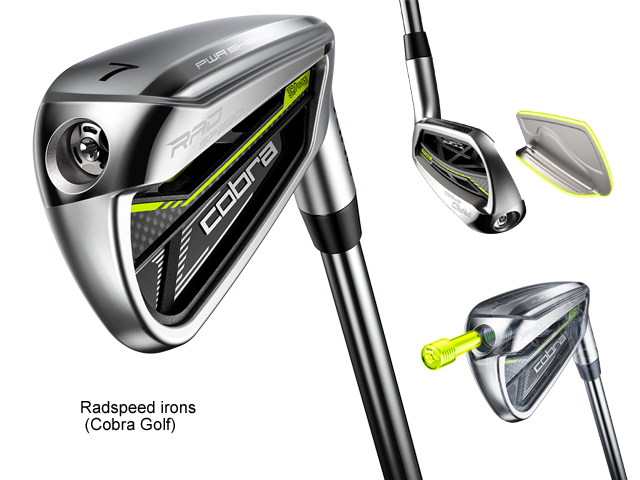 Made with weighting positioned using similar principles as the woods of the same family, Cobra’s Radspeed irons also have an innovative 3D printed polymer medallion.

WYNTK:
Using similar principles as the Radspeed woods, Radspeed irons have weighting placed as far as possible from the head’s center of gravity based on measuring the radius of gyration or distance of a particular mass from the CG. The resulting configuration is described by Cobra as “Extreme Heel & Toe Weighting.”

The 10-gram toe screw and 3-gram weight towards the heel put the head’s center of gravity at the center of the club giving a more stable impact for directional control and forgiveness on off center impacts. Custom club fitters will be able to adjust the toe screw weight by +/- 6 grams from 4 to 16 grams in 2 grams increments to accommodate the needs of the player.

Of interest to the technically minded is for the first time in any iron 3D printing was used to manufacture the polymer medallion in head’s cavity back. Medallions are frequently used to improve an iron’s feel by dampening vibration. The Radspeed’s medallion, which has an intricate lattice work pattern, accomplishes that along with the added benefit of saving weight versus conventionally pressed polymer medallions. The medallion’s pattern is not possible to be manufactured using conventional processes.

Carbon fiber was substituted for steel along the topline giving both an improved visual at address and a weight savings of 2 grams so more weight could be located lower in the head.

We also like the more rounded trailing edge of the Radspeed irons compared with the preceding Speedzone model. It is both better looking sticking out of the bag but also helped with adjustment of the head’s balance.

One Length Radspeed irons played by Bryson DeChambeau are also available and additional details may be found on the Cobra website.