Whether you call it a Speed Channel, Speedblade, Speed Pocket or Speedy Gonzales, this latest bit of golf club technology will have you hitting the ball longer. And, if you want to hit it with a tremendous amount of control as well, then you should consider the Cobra Fly-Z irons.

When the Fly-Z irons were introduced earlier this year, Cobra introduced the Speed Channel – an engineered trench that runs across the sole of the club and around the perimeter of the back cavity. It minimizes face thickness for a more pronounced flex and recovery on impact, creating an enhanced trampoline effect and increased ball speeds across the face; delivering greater distance without sacrificing feel. The Fly-Z Irons also feature the deepest undercut of any Cobra iron. This has created the largest unsupported face COBRA has ever offered, giving you get extreme distance on shots hit well and consistent distance on off-center hits. With all of the speed created by the speed channel undercut, Cobra added an specially designed Thermoplastic Urethane insert right behind the impact zone to dampen vibrations and ensure greater feel. The classic head shape helps to inspire confidence in every shot.

By cutting away a lot of the underbelly of the club, Cobra was able to add mass around the perimeter of the club, creating added forgiveness. In fact, Cobra has deemed these irons suitable for handicappers from 5 to 25. This is a demographic that puts as much importance on feel as it does on distance.

Cobra has also included a very unique feature into the Fly-Z irons, something they refer to as Progressive Spin Technology. Basically, the 3-6 irons are cut with lower spinning V-grooves, while the 7-SW use the higher spinning U-grooves. Although the difference in RPMs is only around 200 with a six iron, that translates to an extra 2.5 yards of carry and 1.5 feet of roll. Cobra also found that the V grooves in the longer irons produced consistent distance and tighter shot dispersion compared to U grooves.

My testing of the Fly-Z irons was nothing short of… surprising. For the longest time, I didn’t buy into the whole Speed Channel/Pocket thing. I had been playing Miura CB-501 irons for a couple of years. I had developed a lot of confidence in them and besides, I knew that my 7-iron went 150 yards every time; and straight.

I was at our local Dick’s Sporting Goods one day and they had just received the Callaway XR irons, and I decided to hit a few. I chose a 7-iron with a steel shaft and was consistently hitting it about 160 yards. Longer than my Miuras yes, but was the difference worth the price of investment? I didn’t think so, and the Miuras stayed in the bag.

A few weeks later, I was at Golfsmith and decided to give the PING G30 irons a try. The demo 7-iron had a graphite shaft and when I began to hit a few, I couldn’t believe my eyes. I was routinely hitting the 7-iron 160 – 165 yards. I think the Miuras were starting to feel the heat.

The next day I found myself back at Dick’s, wanting to test drive a few different irons with this speed pocket feature and see how far I could hit them. Much to my surprise, the Cobra Fly-Z irons quickly rose to the top. I was getting a minimum of 175 out of a seven iron and hitting it that far was effortless. Not only that, but I hit them straighter than anything else and all within 172 – 175 yards. When I finally took them to an outdoor driving range, I found it was easy to draw and fade the ball and, true to form, the scoring irons performed admirably on shots to the green. The higher irons produced a penetrating ball flight without any sign of ballooning and got the ball up in the air quickly. This was true whether I hit the ball dead solid perfect or off-center. The entire set was easy to hit out of thick rough and picked the ball clean from tight lies. Needless to say, the Miuras might soon be taking a brief hiatus.

Aesthetically, these irons appeal to the eye. After playing the Miura irons for years, anything is going to look big and bulky but I didn’t find the Cobra Fly-Z irons all that bad. The top line is thicker than the Miuras but then again what isn’t? The heads are slightly larger and there is more meat in the sole, but that’s a price I was willing to pay. The chrome plating gives these irons a quasi-forged look and provides a more durable finish. With the graphite shafts, these clubs are real light and easy to swing. Needless to say, the Fly-Z irons have found their way into my bag and I don’t look to find anything that is going to replace them for quite a while.

Cobra FLY-Z Irons are available with Black, Red, Orange, Blue, or White badges; Lamkin REL grips are available in matching colors as well. Sets include 4 – PW, GW irons and are available with 95g FST steel or Matrix graphite shafts. Steel sets start at $699, graphite will set you back $799. For more information or to order a set of the Fly-Z irons visit the Cobra website at www.cobragolf.com/fly-z-irons. 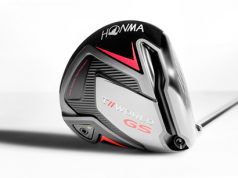 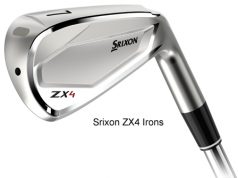 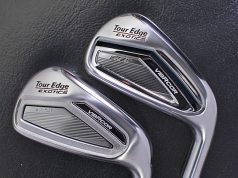 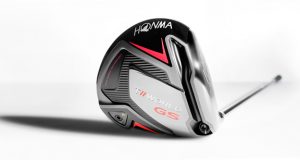