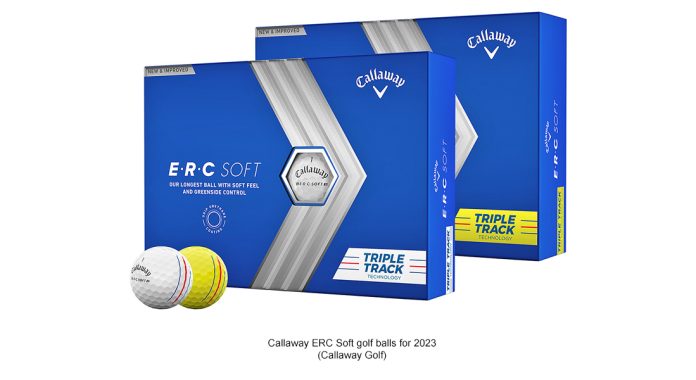 Callaway Golf has announced a revamped version of the ERC Soft golf ball for next season retaining the ionomer cover which is now coated with urethane while the core is a new softer formulation, and the familiar three-line alignment aid has been updated.

WYNTK
Callaway says the latest ERC Soft according to their testing is the longest ball in their lineup, an impressive stat for sure but to that can be added it has a urethane coating on the ionomer cover which helps with control around the greens by producing added spin. The ionomer cover is called a hybrid since it is a blend of plastics including an “impact modifier” that helps with both distance and overall performance.

Sharped-eyed users will also see the alignment lines have also been modified and are now carry the “Triple Track Dagger Technology” moniker achieved, as you may have surmised, by making the ends of the three lines pointed rather than rounded.

The ERC Soft does offer a alternative to those wanting a multilayer ball without paying the price of a so-called premium tour ball though at $39.99 the 2023 version is $5.00 more than the one introduced two years ago.

Ed Travis
Ed Travis is a national award winning golf journalist and has carried on a lifelong love affair with the game. His work covering the business of golf, equipment, golf personalities and travel is regularly seen in numerous print and electronic publications. He has competed in tournament golf both as an amateur and senior professional and though his competitive days are behind him, Travis still plays regularly. He and his wife live on a water hazard in suburban Orlando.
RELATED ARTICLES
Drivers